Even as the global economic expansion has slowed in recent months, U.S. government reports show America’s moderate growth continuing. The nation’s industrial production grew more than analysts expected in November on top of revised estimates showing stronger growth in the four previous months, according to the Federal Reserve. Capacity utilization rose to 80.1%, the highest since March 2008. And manufacturing production surpassed its pre-recession peak. 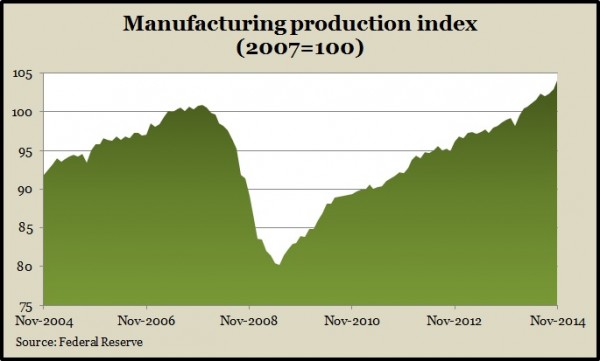 In a sign that the stumbling housing recovery is maintaining momentum, the Commerce Department reported November housing starts and building permits stayed above the annual rate of 1 million. Both indicators declined slightly from October and fell below analyst projections, but they reflected generally rising trends for new housing, including greater consumer confidence and historically low mortgage rates.

Another sign that inflation still is not a threat was the 1.3% 12-month increase in the Consumer Price Index in November. Even adjusting for falling energy prices, the Bureau of Labor Statistics’ core CPI measured 1.7% year-to-year. That’s below the 2% target at which the Federal Reserve considers the U.S. economy to be growing sustainably. Since November 2013, gas prices fell 10.5%, according to the CPI, the government’s broadest measure of inflation.

The moving four-week average for initial unemployment claims dipped for the first time in six weeks, when the average reached its lowest point in more than 14 year. Labor Department data showed average claims down 17.5% from the all-time 47-year average, a continued sign that employers are reluctant to let workers go.

The Conference Board’s index of leading economic indicators gained slightly more than expected in November, most notably in the areas of employment and industrial production. The third consecutive rise in the index suggests continued moderate expansion in the U.S. economy, at least through the winter months. Economists from the business research group said an increasingly competitive job market could finally start raising wages, which would further fuel growth.