Inflation showed signs of nudging toward the Federal Reserve’s notion of sustainable economic growth in November. The Consumer Price Index, the broadest measure of inflation, rose 2% from the year before but only after excluding food and fuel costs. Including those volatile categories – including gasoline, which has dropped in price by 24% since November 2014 – the CPI gained only 0.5%, according to the Bureau of Labor Statistics. The Fed’s sweet spot is 2%, but its preferred measure, contained in the data on Gross Domestic Product, was up just 1.3% in the latest report.

The saw-toothed housing recovery continued in November, with both housing starts and building permits picking up pace more than analysts expected. The Commerce Department said the annual rate of new house construction rose 10.5% from October to nearly 1.2 million structures a year, led by multi-family residences. Although housing starts have returned to their levels before the Great Recession, they’re still below the long-term average. Housing economists at Harvard University have estimated that the U.S. needs a pace of at least 1.6 million housing starts a year to keep up with population growth. Building permits, an indication of future construction, also rose in November, also led by apartments and condominiums. 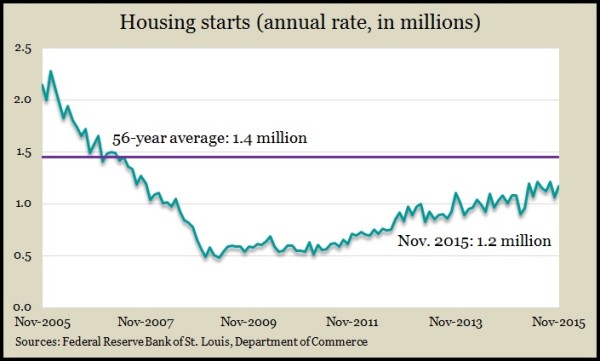 The moving four-week average for initial unemployment claims fell for the second time in three weeks, remaining about 25% below the average level for the last 48 years. Data from the Labor Department suggest employers continue to have little interest in losing the employees they have, which should help lead to the higher wages that fuel consumer confidence and spending.

The U.S. economy should continue moderate growth into 2016, according to the Conference Board’s November index of leading economic indicators. The index rose to its highest point since 2005 and was up for the second month in a row, thanks in part to increased building permits and higher stock prices. The business research group has forecast GDP growth in 2016 to be 2.4%, which is a bit higher than the historical average.