The Federal Reserve reported that the net worth of households rose 2.6% in the third quarter. Net worth holdings – including the value of homes, stocks and other assets minus mortgages credit cards and other debts – rose to $77.3 trillion. Correcting for inflation, net worth still lags the pre-recession peak. The higher figure reflects rising real estate and stock prices and suggests consumers might respond to increased wealth by spending more. 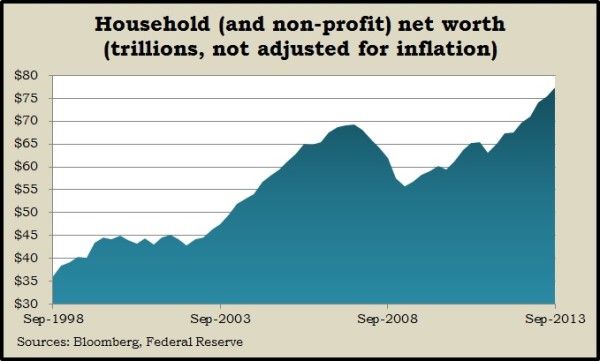 Wholesale inventories grew more than forecast in October, the latest sign that businesses are confident enough in demand that they’re willing to stock warehouses. According to the Commerce Department, inventories grew for the fourth month in a row, to the highest level since May 2011. The inventories-to sales ratio remained level, suggesting companies remain relatively lean.

The Labor Department said the moving four-week average for initial unemployment claims rose for the first time in six weeks. Jobless filings continue to stay below the 46-years average, reflecting a reluctance by employers to let go of their workers.

With consumer expenditures accounting for 70% of the Gross Domestic Product, a larger-than-expected rise in retail spending in November suggested continued momentum for economic growth. Led by spending at car dealerships, home-and-garden stores and online retailers, nine of 13 categories showed gains in November. Even excluding volatile gas and car sales, retailing rose more than expected and is up 4.7% from Nov. 2012, beating the 30-year average of 4.6%.

Separately, Commerce reported that retailers, wholesalers and manufacturers together added 0.6% to inventories in October, continuing a five-month trend and rising by the most since January.

A dip in energy costs for the second month in a row sent the Producer Price Index lower in November. The Bureau of Labor Statistics reported the monthly gauge declined for three months in a row. On a 12-month basis, wholesale inflation rose 0.7% – or 1.3%, if you leave out the volatile food and energy prices. The figures offer more evidence of sluggish economic growth with little fear of inflation on the horizon.