The housing industry perked up in October as sales of new residences reached the highest annual rate in 10 years. The pace of 685,000 houses sold was up 6.2% from September and 18.7% above the year-ago pace, though still half the peak rate hit in mid-2005, according to the Commerce Department. The supply of new houses for sale dropped to its lowest level since July 2016, highlighting concerns that diminished inventory will keep raising prices and impinging on affordability. 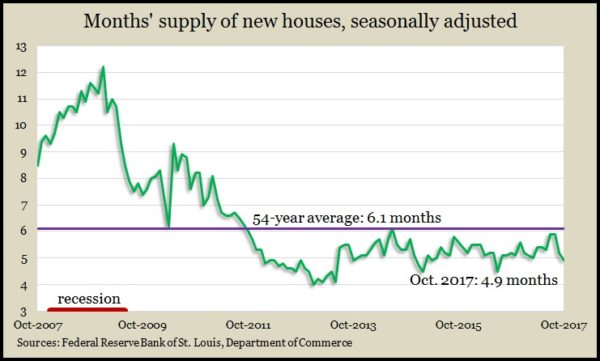 Tight U.S. housing conditions continued to keep home prices rising much faster than inflation overall in September. The S&P/Case-Shiller home price index rose to 6.2% year-to-year growth for the 20-city composite index, up from 5.8% in August. A housing economist for Standard & Poor’s said low inventory combined with a strong economy and low mortgage rates should keep pushing up house prices. He called affordability a “dark cloud” that could squeeze out potential home buyers.

The Conference Board said its consumer confidence index hit a 17-year high in November. Sentiments toward current conditions rose but not as much as expectations for the next six months, especially when it came to employment and income prospects, according to the business research group. Economists consider confidence a precursor to consumer spending, which drives about 70% of U.S. economic activity.

The U.S. economy grew at a 3.3% annual rate in the third quarter, beating an initial estimate of 3%. With a 3.1% growth rate in the second quarter, the country posted the fastest back-to-back pace in three years. The Bureau of Economic Analysis said the increased growth in gross domestic product came in part from boosts in business equipment investments, state and local government spending and inventory buildups. Consumer spending grew at a 2.3% annual rate, down from the initial estimate of 2.4%. The Federal Reserve’s favorite measure of inflation rose 1.4% year-to-year, the lowest inflation in seven quarters.

Pending contracts for existing house sales rose in October for the first time in four months, the National Association of Realtors reported. The trade association’s index benefited from increased activity in the South following Gulf Coast hurricanes, but the year-to-year pace of contracts declined for the sixth time in seven months. The Realtors still expect 2017 sales to reach 5.5 million houses, which would be a 1.3% increase from 2016.

The moving four-week average for initial unemployment claims rose for the third week in a row after hitting a 44-year low. Job losses remained 32% lower than the 50-average, according to Labor Department data, indicating an extended reluctance by employers to let go of their workers. Economists say the tight labor market should raise wages and fuel consumer spending.

Consumer spending rose 0.3% in October, a drop from a 0.9% surge in September led by vehicle replacements following the Gulf Coast hurricanes. The Bureau of Economic Analysis reported that personal income slightly outpaced spending in October, raising the saving rate to 3.2% of disposable income, up from 3%, which was the lowest since December 2007. For the month, the Fed’s preferred inflation gauge gained 1.4% year-to-year. 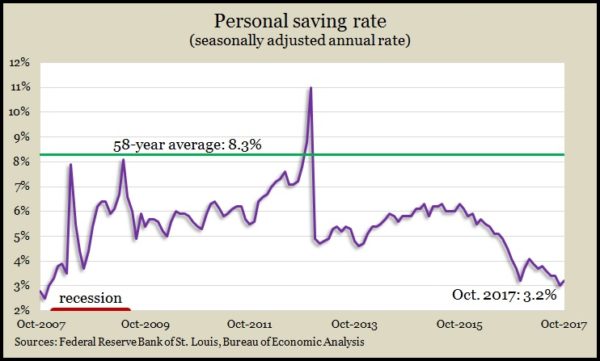 The manufacturing index of the Institute for Supply Management decreased overall in November, but components for new orders and production added to prior strength, suggesting momentum from improving global economic activity. The index indicated industry expansion for the 15th month in a row.