The Federal Reserve reported that personal spending slowed in June, gaining just 0.2%, compared to 0.7% in May. And even though wage gains slowed in June, personal income overall rose 0.4%, which was better than analysts expected. As a result, the personal saving rate rose to 4.8% from 4.6% in May. Consumer spending drives about two-thirds of the U.S. economy and has been weak, rising only about half the long-term annual rate of 6.8%. An inflation measure in the report remained well below the Fed’s target of 2% a year. 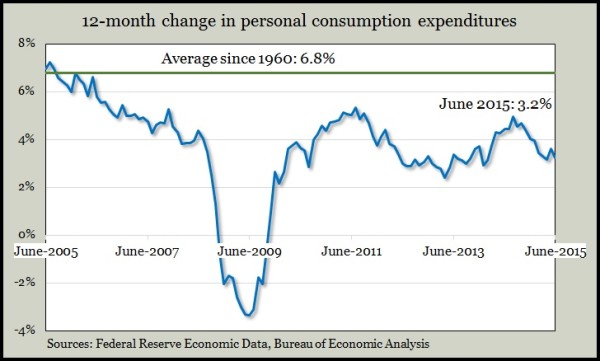 One area where consumer spending remains relatively healthy is automotive, with dealers selling an annual rate of 17.55 million vehicles in July. Vehicle sales figures compiled by AutoData Corp., show dealers on a better-than-expected pace, up 3.2% from May and up 6% from July 2014. Imported truck sales have grown the most, rising 22% in the last year.

After two months of improvement, manufacturing expanded at a slower rate in July, according to the ISM Manufacturing Index. Despite a strong U.S. dollar and weak demand overseas, factories continued growing for the 31st month in a row. Most of the components in the index slowed from May, but new orders grew faster, suggesting further expansion for the sector.

Another look at manufacturing – preceding the ISM index – shows factory orders advancing in June for the first time in three months and for only the second time in the last 11 months. The Commerce Department reported a bigger increase than analysts expected, led by commercial aircraft. But even excluding transportation equipment, the volatile indicator suggested stronger demand for manufacturing.

The As important as factories are, about 90% of the U.S. economy comes from the non-manufacturing sector, which grew in July at its highest level in 10 years. The Institute for Supply Management reported that the sector was expanding for the 66th month in a row and that purchasing managers are upbeat about business conditions and the economic outlook.

The U.S. trade deficit widened more than expected in June as exports contracted and imports grew. Data from the Bureau of Economic Analysis provided further evidence of the headwinds American manufacturers face with the strong dollar and slower economic growth abroad.

The four-week moving average of initial unemployment claims fell for the third week in a row, nearing the 15-year record low reached in May. Labor Department data show new jobless claims staying below the long-term average since the beginning of 2013, showing employers’ reluctance to let workers go.

Employers maintained a steady hiring pace in July, and the unemployment rate stayed at a seven-year low of 5.3%. The Bureau of Labor Statistics reported that non-farm payrolls grew by 215,000 in July, less than analysts expected and below the average rate in the last year but still a healthy clip. Wage growth remained somewhat subdued, but the average work week got slightly longer. A broad measure of unemployment, which includes workers who settled for part-time positions and those who gave up looking for jobs, also stayed at a seven-year low.

The amount of consumer credit outstanding kept growing in June, reaching another a new peak again led by non-revolving debt for student loans and vehicle financing. The Federal Reserve reported that revolving credit, which includes credit cards, rose $5.5 billion, suggesting consumers may be more comfortable spending, even if it means taking on more short-term debt.