U.S. home prices emerged from a double-dip recession in June with the first year-to-year gains since September 2010, according to the S&P/Case-Shiller Home Price Index. The data enthused a housing economist with S&P who said, “We seem to be witnessing exactly what we needed for a sustained recovery.” 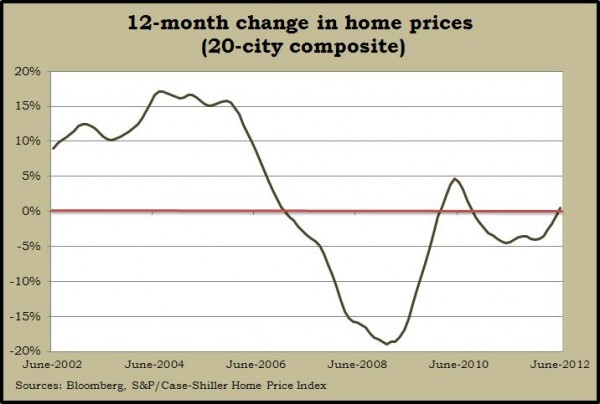 American consumers, on the other hand, have grown less optimistic, based on the August reading of the Conference Board’s consumer confidence index. The indicator dropped to its lowest point since November as expectations for the future fell and assessments of current conditions remained restrained.

The economy continued expanding only gradually in the second quarter, though at a slightly faster pace than initially estimated. The Bureau of Economic Affairs upgraded the annual growth rate of the Gross Domestic Product to 1.7% from an earlier 1.5% reading, based on evidence of greater consumer spending and commercial building, a narrower trade gap and smaller drop in government spending. One measure of corporate profits rose 13.3% year-to-year, down from 19.1% in the first quarter.

Sluggish expansion also appeared in the latest anecdotal evidence reported in the Federal Reserve’s Beige Book. Six of the Fed’s 12 districts saw modest growth in July and early August. Three cited moderate growth, including the Chicago district, which noted a slowdown in expansion.

Another sign that housing is starting to turn around came from the National Association of Realtors, which reported pending sales of houses rose to their highest point since the heyday of a federal tax incentive for homebuyers in 2010. The trade group’s index showed a year-to-year gain for the 15th month in a row following 15 months of declines.

Consumer spending rose in July for the first monthly increase since April, according to the Bureau of Economic Analysis. With such spending driving 71% of GDP growth, the gain supports continued economic expansion. Spending rose more than income for the month, resulting in the personal saving rate dipping to 4.2% of disposable income from 4.3% in June. Also, a key measure of inflation declined to an annual rate of 1.6%, the lowest since October and within the Federal Reserve’s target of 2%.

The moving four-week average for initial unemployment claims rose for the third time in four weeks, offering another reminder of the long slog to recover jobs lost during the Great Recession. Data from the Labor Department showed new jobless applications at a six-week high, which is not a good sign for August employment reports, due out next week.

Chicago purchasing managers reported increases in orders, production and employment in August, suggesting there’s still life in the industrial sector, which led the U.S. emergence from recession three years ago. According to the Chicago chapter of the Institute of Supply Management, activity is down from earlier in the recovery but has indicated 36 months in a row of expansion.

Revived demand drove up factory orders in July, according to the Commerce Department. Commercial aircraft and automotive orders helped lift the sector, but even excluding transportation, factory orders broadly rose for the month and are 3.5% ahead of the same time last year.

Consumer sentiment rose more than expected in August, largely because of stronger feelings toward current conditions. The index from the University of Michigan/Thomson Reuters reached its highest point since October, although it’s still relatively gloomy historically. In particular, expectations for six months from now stayed downbeat.