The annual rate of new home sales rose less than expected in July, at the slowest pace since March, the Commerce Department reported. The rate of sales rose 2.4% from June to 412,000 houses sold. The inventory of houses for sale grew 7.1% from the year before, and the median sales price rose a moderate 2.9%, which could help spur continued progress in the housing recovery.

Considerable boosts in demand for commercial aircraft lifted durable goods orders more than expected in July. The volatile indicator shot up by its highest rate ever, according to the Commerce Department. But factoring out requests for transportation equipment, orders dropped for the second time in three months, and business capital investments declined for the third time in four months. Overall, the indicator pointed to sound manufacturing conditions following strong gains in June.

U.S. home prices continued rising in June, but year-to-year gains narrowed for the seventh month in a row, according to the S&P/Case-Shiller Home Price Index. In another sign that the housing recovery probably peaked in 2013, the slowing increase in prices suggests a “more normal” housing climate, an economist for S&P said. He said price gains should continue shrinking as mortgage rates gradually go higher.

Americans expressed their greatest optimism for the economy since before the recession, according to the Conference Board’s consumer confidence index for August. The indicator rose in particular because of improved attitudes toward current conditions. Near-term expectations diminished in part as a result of uncertainty over individuals’ earnings.

Another sign that housing’s turnaround continues came from the National Association of Realtors, which reported that pending sales of houses advanced 3.3% in July. The year-to-year gain slipped 2.7%, but overall the trade group cited mounting momentum for home sales, including low mortgage rates, increasing inventory, improving job markets and moderating prices.

The economy expanded at an annual rate of 4.2% in the second quarter, slightly stronger than earlier estimated and up from a 2.1% drop in the previous quarter, the Bureau of Economic Affairs reported. The Gross Domestic Product benefited from more business investments than previously estimated as the economy rebounded from weather-related setbacks in the first three months of 2014. The Federal Reserve’s preferred measure of inflation grew 1.6% in the last 12 months, the most in six quarters but below the 2% target the Fed has set as a sign that economic growth can sustain itself. 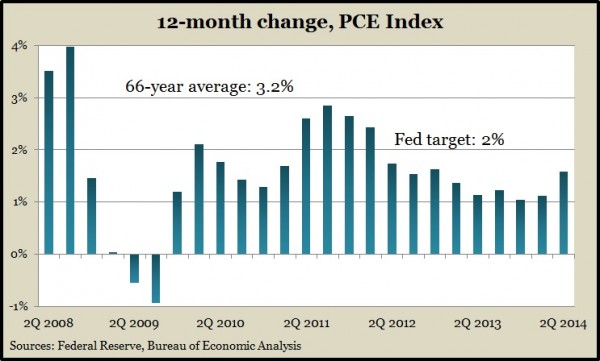 The moving four-week average for initial unemployment claims fell for the first time in three weeks and remained below the long-term average, suggesting employers continue to be reluctant to lose workers. Data from the Labor Department show claims down 10% from year-ago levels and 54% under the high point during the recession.

Consumer spending declined in July for the first time in six months, according to the Bureau of Economic Analysis. With such spending driving about 70% of GDP growth, the dip could cause concerns if sustained. The same report showed personal income rising less than analysts expected and at a slower pace than in previous months, which helps explain the diminished spending. The Fed’s favorite measure of inflation increased by 1.5% from July 2013, marking 27 months in a row below the target rate of 2%.

Consumer sentiment rose more than expected in August to its second-highest reading since reaching a six-year peak last July. The index from the University of Michigan/Thomson Reuters suggested especially improving opinions of current conditions – the highest level in seven years. Expectations for six months hence fell slightly from July but were more optimistic than a preliminary count earlier in August.