Housing prices continued to increase, although at a slower rate for the second month in a row.  Year-to-year comparisons from the S&P CoreLogic Case-Shiller index showed a 3.5% June increase for the 20-city composite, down from 3.6% in May and 3.9% in April. The two-month slide followed eight consecutive months of rising increases. An analyst for S&P said more data would be needed to tell whether declining gains are a trend. Despite recent deceleration, housing prices kept rising far faster than overall inflation.

The Conference Board reported a second monthly decline in its consumer confidence index in July, dropping to the lowest level since 2014. Consumers expressed lower opinions of both business and job conditions as well as greater pessimism toward the future. The business and research group said based on such feedback recent rebounds in consumer spending will likely cool in coming months. Consumer spending accounts for more than two thirds of U.S. economic output.

The Commerce Department reported that new-home sales picked up in July up for the third month in a row following the COVID-19 quarantines, rising to the highest annual rate since December 2006. Brisk sales cut inventories to their lowest level since January 2013, lows not reached previously since 2004. Tight supplies continued to push up prices, with the median new home price rising 7.2% from July 2019.

The Commerce Department said durable goods orders rose 11.2% in July, the third consecutive gain after the pandemic disrupted global demand, supply chains and factory operations. Military aircraft and automobiles led the latest month’s orders, which despite increases remained 6.3% behind February and 12.1% lower than orders placed in July 2019. A proxy for business investments also rose for the third month in a row and was down 0.5% from February and down 1.9% from the year before.

The four-week moving average for initial unemployment insurance claims declined slightly for the 17th time in 18 weeks but remained historically elevated as staffing continued to stagger from the pandemic. About 27 million Americans received jobless benefits in the latest week, up from 1.6 million the year before. The Labor Department said weekly claims fell slightly but remained above 1 million, about five times the level in mid-March.

The U.S. economy sank a little less than initially estimated in the second quarter, with gross domestic product contracting 31.7%, the Bureau of Economic Analysis reported. The preliminary estimate was a 32.9% decline. Consumer spending declined at an annual rate of 34.1% from April through June, led by lower spending on health care services, clothing and footwear. The Federal Reserve Board’s favorite measure of inflation remained below the target rate of 2%, falling at an annual rate of 1% from the first quarter and up just 1% compared to the second quarter of 2019.

Pending home sales rose another 5.9% in July, the third gain in a row, prompting the National Association of Realtors to claim a V-shaped sales recovery. The trade association’s index of pending purchases was up 15.5% from July 2019 amid low mortgage rates and pent-up demand following the disrupted spring sales season. The Realtors forecast sales of 5.4 million houses in 2020, which would be up 1.1% from 2019. The group also cited “scarce” inventory, despite projections of increased new construction.

The Bureau of Economic Analysis showed the recovery of consumer spending slowed in July, rising 1.9% following comebacks of 6.2% in June and 8.6% in May. At an annual rate, personal expenditures, the biggest driver of GDP, remained 4.6% behind their peak pace in January and on par with their level at the end of 2018. Personal income rose 0.4% in July as more employment compensation started replacing government subsidies tied to the pandemic. The personal saving rate fell to 17.8% from a peak of 33.7% in April. The Fed’s main gauge of inflation rose 1.3% from July 2019, up from 1.1% in June. 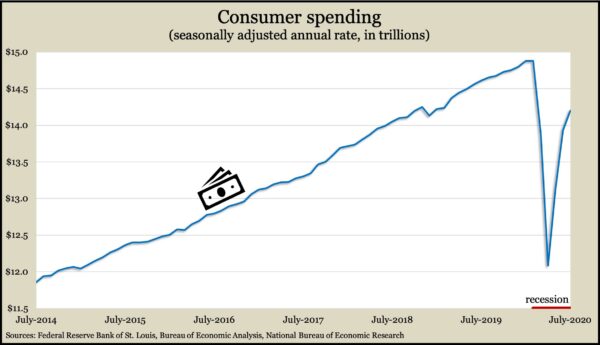 A precursor to spending, consumer sentiment, “remained trendless in the same depressed range it has traveled during the past five months,” according to the University of Michigan. About half of consumers surveyed said they expected the economy to improve in the next year, but 62% described current conditions as unfavorable. An economist who oversees the longstanding research said without further fiscal stimulus, the rebound in consumer spending will slow significantly by the end of the year.