The annual pace of existing home sales rose 2% in July, the second monthly rise and 1.5% above the year-ago rate. The National Association of Realtors said the number of houses for sale grew 7.3% from June but remained near historic lows, with just a 2.6-month supply available based on the current sales rate. The lack of starter homes for sale has meant more of the transactions are on the high end of the market, the trade group said, which helped push the median sales price to $359,900, up 17.8% from July 2020. That marked the 113th month in a row that the median price rose from the year before.

The annual sales rate of new houses rose 1% in July, the first gain in four months after reaching a 15-year high a year ago. The Commerce Department said the median price rose 18% from July 2020 to a record $390,500. The inventory of new houses for sale rose for the fourth month in a row to a 6.2-month supply, the highest since 6.6 months just after the pandemic recession ended in April 2020. Houses still waiting for construction to begin made up 33% of new-home sales. Fully constructed houses were 24% of sales.

The Commerce Department said durable goods orders fell 0.1% in July, the first decline in three months, after reaching an all-time high in June, unadjusted for inflation. Automotive orders rose 5.8% and commercial aircraft dropped 48.9%. Excluding the volatile transportation sector, orders rose 0.7% from June. Overall, demand for long-lasting manufactured items was up 25.3% from July 2020. Core capital goods orders, a proxy for business investments, rose slightly from June to a record high and were 16.4% ahead of the year before.

The four-week moving average for initial unemployment insurance claims declined below 370,000 in the latest week, under the long-range average for the first time since mid-March 2020. Labor Department data shows the average dropping from a record 5.3 million in April 2020 but still above the 52-year low set just before the pandemic at 209,500. More than 12 million Americans claimed jobless benefits in the latest week, up 1.5% from the week before. About 75% of the claims are tied to temporary pandemic programs.

The U.S. economy grew at a 6.6% annual rate in the second quarter, up from a 6.5% initial estimate from the Bureau of Economic Analysis. Consumer spending, which drives about 70% of economic activity, rose at a pace of 11.9%, led by spending on services, particularly at bars and restaurants. Adjusted for inflation and seasonality, the gross domestic product reached a record $19 trillion, up 0.8% from the previous peak at the end of 2019. The year-to-year inflation rate, according to the Federal Reserve’s preferred gauge, the PCE Index, was 3.9%. 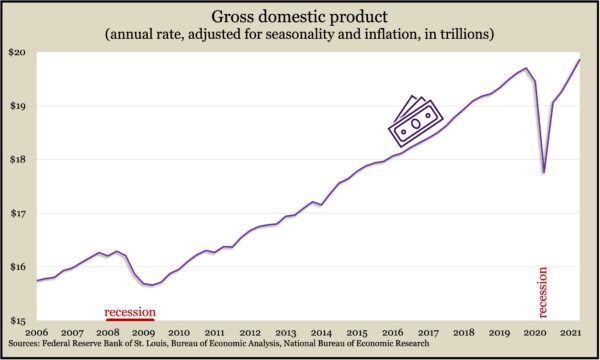 The Bureau of Economic Analysis showed consumer spending rose by 0.3% in July, down from a 1.1% gain in June. Spending was broadly focused on services, particularly bars and restaurants, although outlays for gasoline also went up. Personal income rose 1.1% from June, boosted by federal child tax credit payments. The Federal Reserve’s main gauge of inflation jumped to 4.2% from July 2020, the biggest increase since the summer of 1991. Month to month, the PCE Index rose 0.4% in July, down from 0.5% in May and June and 0.6% in March and April. 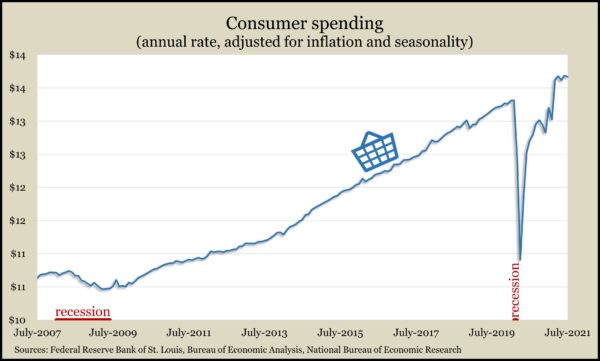 Considered a precursor to spending, consumer sentiment, fell to its lowest reading in more than a decade in August, a result of “dashed hopes” from the latest surge in COVID-19 cases. The University of Michigan said the sentiment reading dropped to 70.3 from 81.2 in July. The setback doesn’t suggest an imminent threat against the economy, a university economist said, but a similar decline after the 9/11 terrorist attacks in 2001 took an emotional toll on spending that lasted for months afterward.