Another sign of the long, productive housing rebound was a faster pace of new home sales in July. Commerce Department data showed an annual sales rate of 654,000 single-family residences in July, the fasted pace since October 2007, before the Great Recession. The supply of houses for sale shrank in relation to demand to the lowest level in three years. 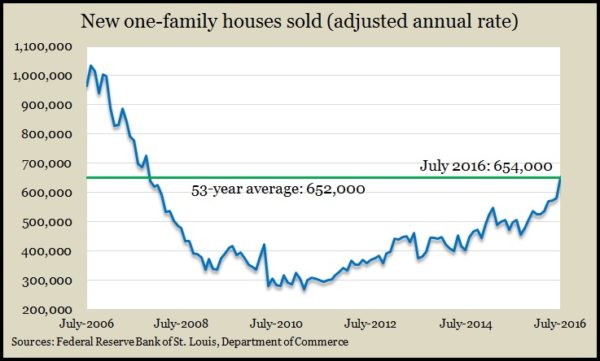 Meantime, the annual rate of existing home sales fell unexpectedly to 5.39 million in July and declined from the year-ago level for the first time since November 2015. The National Association of Realtors complained about low inventory levels and their effects on affordability, raising the median sales price 5.3% from the year before. The supply of houses for sale has dropped on a year-to-year basis for 14 months in a row.

Lifted by commercial aircraft sales, a measure of manufacturing prospects, durable goods orders, rose more than analysts expected in July. Even excluding orders for transportation equipment – a heavy, but volatile factor – bids for manufacturing gained 1.5% from June, according to the Commerce Department. A key measure of business investments also rose more than anticipated, though year-to-year comparisons show manufacturing continuing to content with weak global demand and a strong dollar.

The moving four-week average for initial unemployment claims fell for the first time in four weeks, remaining well below historic levels for layoff notices. According to Labor Department data, jobless applications were 26% under the 48-year average, suggesting persistent reluctance by employers to let workers go.

The economy grew at an annual rate of 1.1% in the second quarter, down from a preliminary estimate of 1.2% but higher than each of the previous two quarters, the Bureau of Economic Analysis said. The slower rise in Gross Domestic Product reflected a draw down in inventories as businesses adjusted supplies after months of overestimating demand. Consumer spending – which drives about two-thirds of business activity – increased at an annual rate of 4.4%, slightly higher than previously estimated and above the 3.3% long-term average.

Consumer spending should continue on a steady pace through 2017, based on the August consumer sentiment index from the University of Michigan. Although the index dipped slightly to 89.8 from 90 in July, assessments of current economic conditions remain relatively high. Expectations for long-term inflation fell to the lowest level ever, and large purchases are tied to low interest rates.