Existing home sales for July decreased 0.7% to an annual pace of 5.34 million, making it the fourth decline in a row. Sales were 1.5% below the year-earlier pace and have fallen for five straight months. The National Association of Realtors blamed increased home prices for reducing demand. The median selling price was $269,600, up 4.5% from July 2017.

According to the Commerce Department, new home sales decreased in July by 1.7% to 627,000 units, which is the second decline in a row and the slowest pace since October. Inventory was the highest it’s been since August 2017, representing a supply of 5.9 months’ worth, but still suggesting a shortage. The median sales price of new houses sold in July was $394,300, up 1.8% year-to-year. 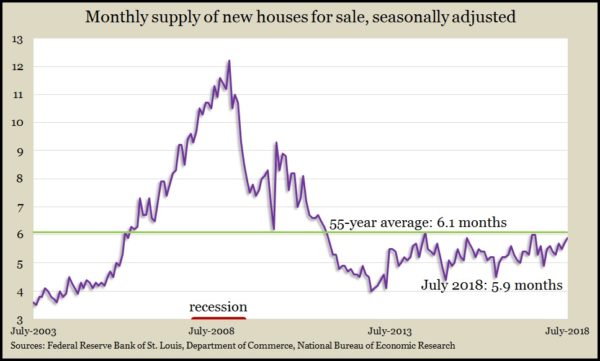 The four-week moving average for initial unemployment insurance claims was down for the sixth time in seven weeks at 213,750, nearing the 48-year low set in May. The measure remains 40% below the 51-year average, which it has been below every week since early 2013, according to Labor Department data. The low level of jobless claims is strong evidence that employers are reluctant to let workers go during a tight labor market.

Manufacturer orders for durable goods declined in July for the third time in four months. The Commerce Department said a drop in commercial aircraft orders led the setback. Excluding the volatile transportation category, orders rose for the sixth month in a row and were up 8.2% from July 2017. A measure of business investment within the Commerce report rose for the fourth consecutive month and was up 7.2% from the year before.