The housing industry continued to recover in July. The annual rate of both housing starts and building permits rose near their peaks before the COVID-19 pandemic, which also were their highest levels since before the previous recession. According to data from the Commerce Department, starts of single-family housing, needed to boost low inventories, rose about 8% from the pace in June. Multi-family starts increased 57%. Although near their highest rates in more than a decade, housing starts and building permits, an indicator of future housing construction, remained little more than half their record levels before the financial crisis. 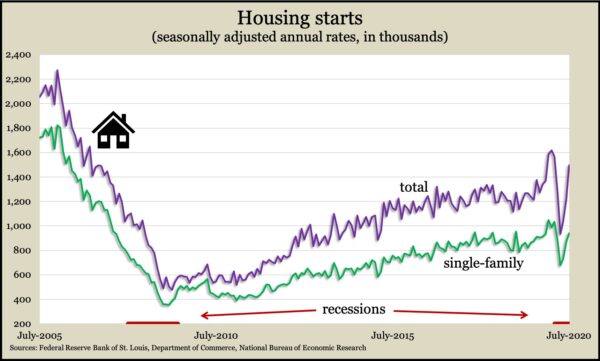 The four-week moving average for initial unemployment claims declined slightly for the 16th week in a row but remained more than three times the average level since 1967. More than 28 million Americans were receiving jobless benefits, up from 1.7 million at the same time in 2019, according to the Labor Department. More than 12 million of the beneficiaries received relief related to the pandemic. Weekly claims, which in the previous week dropped below 1 million for the first time since March, rose above 1 million again.

The Conference Board reported that its index of leading economic indicators rose 1.4% in July after growing 3% in June and 3.1% in May. The business research group said a broad-based recovery from initial fallout from the pandemic “appears to be losing steam.” As a result, the group projects the pace of economic growth “will weaken substantially” through the end of the year.

With low mortgage rates, existing home sales shot up a record 24.7% in July, eclipsing the 20.7% rise in June, according to the National Association of Realtors. The annual sales rate of 5.86 million houses was the biggest since December 2006. The trade association called the market “booming” and attributed higher demand for bigger houses to accommodate remote working. The sustainability of the pace could be challenged by low inventories, which the Realtors called “dire.” The median price exceeded $300,000 for the first time, rising 8.5% from July 2019 for the 101st consecutive year-to-year gain.