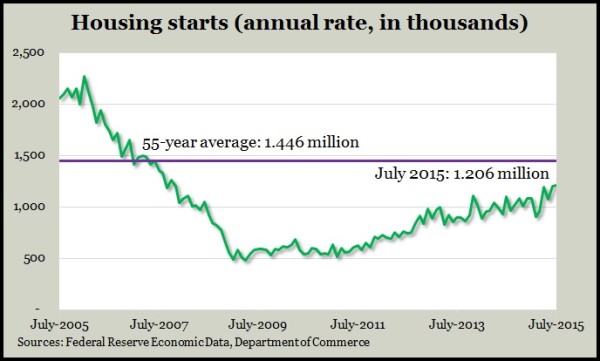 The broadest gauge of inflation rose less than expected in July, barely budging to a 0.1% gain from June. The Bureau of Labor Statistics reported that the Consumer Price Index rose just 0.2% from July 2014. Excluding volatile food and energy prices (the latter down nearly 15% from a year ago), the 12-month core inflation rate was 1.8%, still below the 2% Federal Reserve target for sustainable economic growth.

The four-week average of initial unemployment insurance claims rose for the first time in five weeks, following its lowest level since April 2000. Data from the Labor Department indicated continued reluctance by employers to let workers go, as jobless applications remained below their long-term average since January 2013.

The National Association of Realtors reported that July’s existing home sales rose to an annual rate of 5.59 million, the fastest annual pace since February 2007. The trade group said more homeowners are moving up because of steady hiring in the economy, increased home equity and a tick up in mortgage rates. It also cited rising prices (41 months in a row of year-to-year gains) and thin wage growth as possibly dampening further sales, especially among first-time buyers.

The Conference Board’s index of leading economic indicators declined for the first time since April 2013, mostly because of the decline in housing permits. Even so, economists for the business research group said signs point to continued moderate U.S. economic growth, at least through the end of 2015.