Retail sales declined 1.1% in July, the second drop in three months. Only five of the 13 retail categories gained in July, including gas stations, where sales rose by 2.4%, in part because of higher prices. Car dealers led the monthly sales losses with a 3.9% decline. Overall retail sales remained above their pre-pandemic level for the 13th month in a row, according to Commerce Department figures. Sales for bars and restaurants rose 1.7% in July and stayed above their pre-pandemic mark for the fourth consecutive month. 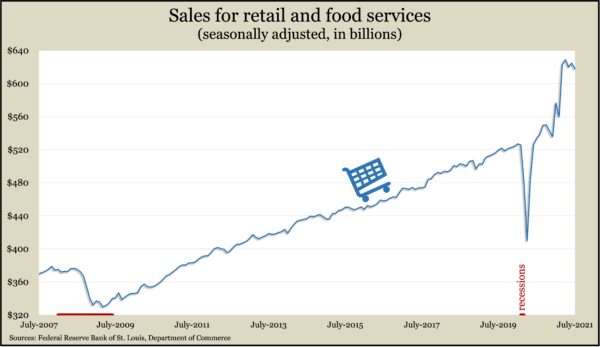 The Federal Reserve reported a 0.9% gain in industrial production in July, although output remained 0.2% below levels before the pandemic. Automakers increased output by 11.2%, contributing half of the 1.4% lift in manufacturing production for the month. Utilities output slid 2.1% after an unseasonably hot June. Industries’ capacity utilization rate, an early indicator of inflation, rose for the fifth month in a row, registering 76.1%, below the pre-pandemic level of 76.3% and still below the long-term average of 79.6%.

Housing construction data sent mixed messages in July with the pace of building permits and housing starts slower than earlier in the year. The annual rate for starts declined 7% from June to 1.5 million houses but was up 2.5% from the year before and near its highest pace in 15 years. Notably, the rate of single-family houses under construction rose for the 13th time in 14 months, according to data from the Commerce Department. The annual rate of building permits rose for the first time in four months and was on par with the pace in late 2006. 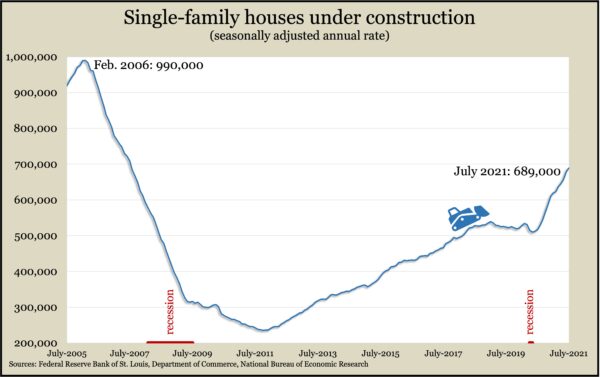 The four-week moving average for initial unemployment claims declined for the first time in five weeks, sinking to its lowest level since mid-March 2020. At 377,750 applications, initial filings fell to within 2% of the 54-year average. They were down from a record high of 5.3 million in April 2020. Fewer than 12 million Americans claimed unemployment benefits in the latest week, down 2.6% from the week before. About three-quarters of the claims were tied to temporary pandemic relief programs.

The Conference Board said its leading economic indicators rose again in July, up 0.9% after gains of 0.5% in June and 1.2% in May. The business research group said each component of its index contributed to the measure’s rise to its highest level ever. Despite possible headwinds from the delta variant of COVID-19 and inflation, the Conference Board forecast GDP growth of 6% for 2021 and 4% for 2022.