Amid higher mortgage rates and continued Realtor complaints of thin inventories, pending contracts for house sales dipped in June from a six-year high in May. The National Association of Realtors said contract signings rose from the year-ago pace for the 26th month in a row. The trade group said it expects 2013 sales to rise 8% from 2012 with prices increasing 11%.

A precursor to freer spending, consumer confidence, dipped a little in June from a five-year high, slightly less than forecast. But the Conference Board said its index indicated an “expansionary” level at which the economy is strengthening and may even be gaining momentum. Overall, consumers expressed greater confidence in current conditions but slightly less optimism about employment and economic prospects six months out.

The housing recovery showed another sign of continuing in May with a 12.2% year-to-year gain in prices, according to the S&P/Case-Shiller Home Price Index. Each of the cities in the 20-city composite improved from May 2012, with Dallas and Denver hitting all-time highs. The overall index reached its highest level since March 2006.

The U.S. economy grew more than expected in the second quarter, though slower than previously estimated in the first three months of 2013, the Bureau of Economic Analysis said. Despite a lower increase in consumer spending from April through June, the gross domestic product advanced on gains in exports, business investments and a smaller reduction in federal spending. In a major revision that happens about twice a decade, the bureau said the Great Recession was not quite as severe as previously estimated, and the recovery has been a little stronger though also more uneven. 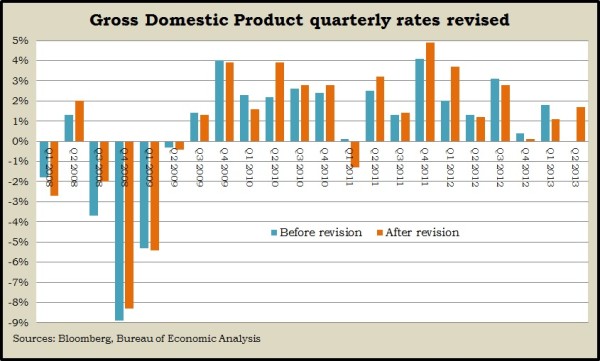 The manufacturing sector expanded in July, surprising analysts by its strength. The Institute for Supply Management reported rises in new orders and employment and the largest increase in its production index since the economic recovery began four years ago. The ISM index has increased for two months in a row after contracting in May.

Led by lower spending on public buildings, commercial structures and multi-family housing, construction spending declined in June, according to the Commerce Department. The setback was the first in three months for the indicator overall, but residential building continues to grow at a moderate pace, up 18% from June 2012.

Americans bought an annual rate of 15.7 million cars and trucks in July, according to the industry group Autodata Corp. The rate dipped 1.8% from June but was up 11.2% from July 2012. Policy makers at the Federal Reserve have identified the automotive industry as one of the driving forces in recent economic growth.

The four-week moving average of initial unemployment claims dipped for the third week in a row and the fifth time in six weeks, reaching its lowest level since mid-May. Labor Department data show jobless claims staying below the number of new entrants to the job market, which should lead to continued gradual improvement in employment conditions.

Employers added fewer jobs than expected in July, dipping below the 192,000 per-month rate through the first half of the year, which was the best since 2006. The Bureau of Labor Statistics reported that June and May payrolls were lower than previously estimated. The unemployment rate sank to 7.4%, the lowest since December, 2008.

Demand for commercial aircraft and automobiles lifted factory orders in June, the Commerce Department said. The gain was the third in a row and the fourth time in five months. Aside from transportation-related orders, factory activity has been somewhat tepid lately.

American consumers spent 0.5% more in June than in May, the biggest gain in personal spending since February. Spending outpaced income for the month, and the personal saving rate dipped to 4.4% of disposable income from 4.6% in May, according to the Bureau of Economic Analysis. Higher gasoline costs helped fuel the spending. A key measure of inflation in the report showed rates staying well below the Fed’s target of 2%.