The Commerce Department said retail sales were barely positive in July. Though diminishing, it was the fourth consecutive month of gains for stores, suggesting some resilience among American consumers, whose spending accounts for 70% of gross domestic product. Even factoring out the volatile gas and automotive sales, the slight gain was lower than expected. Altogether, retail sales rose 3.7% from the year before, under the year-to-year average gain of 4.6% over the last 30 years. 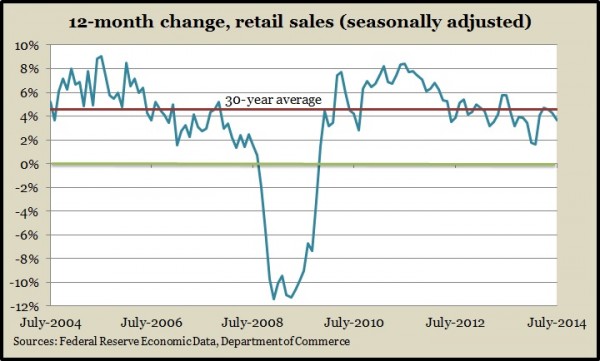 After a couple of months rebounding from the harsh winter, American businesses slowed the buildup of their inventories in June. The 0.4% gain in inventories slightly outpaced sales, Commerce said in a separate report. The resulting inventories-to-sales ratio stayed relatively lean.

The moving four-week average for initial unemployment claims rose for the first time in six weeks, but filings were second lowest in more than eight years. Labor Department data showed new jobless applications have been below the 46-year average every week since the beginning of 2013, a sign that employers remain reluctant to let workers go, fueling growth in the job market.

Wholesale inflation hardly budged in July, with energy prices dipping for the fifth time in six months and food costs gaining for the first time in three months, the Bureau of Labor Statistics reported. The year-to-year change in the core Producer Price Index, which excludes volatile energy and food costs, rose 1.6%, lower for the second month in a row and still below the 2% inflation at which the Federal Reserve says the economy should be OK growing on its own.

Manufacturing led another gain in industrial production in July, the sixth month in a row of expanded output, the Federal Reserve reported. With less help lately from consumer spending and housing expansion, industries have been supporting more of the U.S. economy’s growth. Capacity utilization rose to its highest mark since before the 2008 financial collapse but stayed under the mark at which inflation becomes a fear.