Bumpy signs of jobs recovery included 5.9 million job openings in June, an 18% rise from May, according to the Bureau of Labor Statistics. Demand for workers was still 16% below the level in February, before the COVID-19 pandemic. Employers reported 6.7 million hires in June, the second-most in 20 years of data, following a 7.2-million position hiring binge in May. However, the number of job separations rose to 4.8 million in June, the first increase since a historic 14.6 million job losses in March.

Inflation on the wholesale level rose 0.6% in July, the widest margin since October 2018. It was only the second gain in six months, suggesting how much the pandemic has disrupted demand for goods and services. Costs for services led the price increases, but energy prices also contributed, rising 5.3% in the month. The Bureau of Labor Statistics said its Producer Price Index fell 0.4% from July 2019, the fourth consecutive year-to-year decline. Excluding the volatile costs for energy, food and trade services, the core PPI rose 0.1%, the first gain since March.

The broadest measure of inflation showed prices continuing to recover after record declines tied to the pandemic. The Consumer Price Index rose 0.6% in July, led by a 5.6% jump in gas prices, which rose 12.3% the month before. Year-to-year, however, gas prices declined more than 20%, dampening the one-year inflation rate to 1%, or half of what the Federal Reserve Board has targeted as a sustainable rate for the economy. According to the Bureau of Labor Statistics, the core CPI, which excludes the volatile categories of energy and food prices, rose 0.6% from June, the biggest one-month rise since 1991, although it followed an unprecedented three-month drop through May. Compared to July 2019, the core CPI rose 1.6%.

The four-week moving average for initial unemployment claims declined for the second  week in a row and the 15th time in 16 weeks after peaking at 5.8 million in April. Volatile weekly applications fell below 1 million for the first time since widespread shutdowns began in mid-March and then crested at nearly 6.9 million. The Labor Department reported that 28.3 million Americans are claiming jobless benefits, up from 1.5 million a year ago.

Consumer spending continued bouncing back in July with retail sales surpassing its previous high in January. The Commerce Department said total sales climbed 7.3% in July following gains of 8.4% in June and a record 18.2% in May after sales plunged amid pandemic shutdowns. Nine of 13 categories advanced sales from June, led by appliance stores, gas stations and clothiers. Year-to-year, sales rose 2.7% with nine categories improving, notably online retailers, home-and-garden centers and grocery stores. A key indicator, restaurant and bar sales, continued to recover from 17-year lows in April but only to levels from 2015. 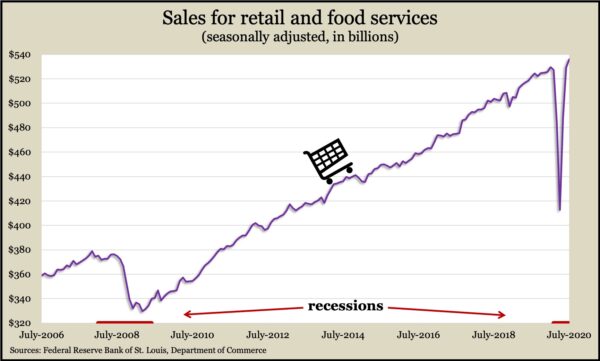 The Federal Reserve said the nation’s industrial output rose 3% in July, the third monthly gain, although production remained behind its pre-pandemic level and 8.2% lower than July 2019. The biggest component, factory output, grew 3.4% from June, led by a 28.3% gain in automotive production, but was still 7.7% behind the year before. U.S. industries were running at 70.6% of their operating capacity in July, up from 64.2% in April but down from 76.9% in February. A high capacity utilization rate is an early warning sign of inflation, but the long-term average of 79.8% hasn’t been reached for more than 12 years.

The University of Michigan said consumer sentiment rose only slightly from the end of July, suggesting continued pessimism about the long-term economy. Low interest rates fueled optimism toward buying conditions, according to the survey-based report, but gridlock in Washington over further pandemic assistance has augmented uncertainty and made consumers more cautious. Confidence in economic policies dropped to the lowest point in more than three and a half years.