Recoveries from financial recessions tend to be slow, but the languid pace of the U.S. economy also stems from low productivity. The Bureau of Labor Statistics reported the first gain in three quarters of productivity, measured as output per hour worked. In the last four quarters, workers’ efficiency grew 0.3%, compared to a long-term average of 2.2%. Some analysts blamed employer reluctance to invest in new equipment to boost productivity. Others contended that Americans have not yet adapted new technologies to worker efficiency.

Led by high expectations for automobile orders, wholesale inventories rose more than analysts expected in June. Inventories increased by 0.9% from May, surpassing a 0.1% boost in sales, the Commerce Department said. The resulting inventories-to-sales ratio – a measure of corporate leanness – grew to a level not reached since the Great Recession.

In a sign that hiring markets remain relatively healthy, the number of job openings stayed in record territory in June. The Bureau of Labor Statistics said the number of openings retreated slightly from the all-time high of nearly 5.4 million in May. The number of people hired rose 2.4%. The quit rate – an indicator of workers’ confidence in finding new jobs – stayed at its highest level since before the recession.

The moving four-week average for initial unemployment claims fell for the fourth week in a row, reaching its lowest point since April 2000. Average claims have been below their historical level since early 2013, suggesting employers are persistently reluctant to let employees go. 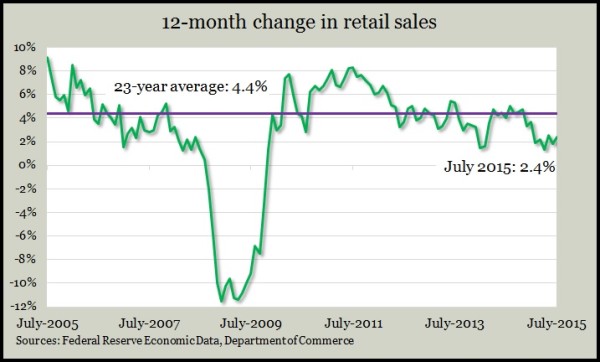 Business inventories rose more than expected in June and at a higher rate than sales. As with wholesale inventories, automobiles led the surge and pushed the inventories-to-sales ratio to recessionary levels.

In another sign of weak commodities prices, reflecting slow global economic growth, the Producer Price Index rose 0.2% in July and declined by 0.8% since July 2014. The Bureau of Labor Statistics noted that both food and energy prices fell in July, the first time that happened in three months. Excluding those volatile costs, inflation on the wholesale level was unchanged from June. The year-to-year drop was the sixth in a row for the index.

Led by automakers, U.S. industrial production expanded in July for the second month in a row and only the second time this year. The Federal Reserve said manufacturing increased output and used more capacity while mining slacked off from its earlier pace and utilities actually declined a tad. Total capacity utilization rose to the highest point since April but remains behind its long-term average, at which point pressure builds for inflation.

American consumer sentiment continued to ease off from recent highs but remained at a relatively high level, according to a preliminary read of the University of Michigan index. A researcher with the longstanding consumer survey said confidence in the past nine months has been the highest since 2004. He said he expects consumer spending to increase by 3% in 2015 and in 2016.