In a reminder of slowing economies globally, U.S. factory orders fell more than expected in February, declining for the third time in four months. The Commerce Department reported the volatile indicator showed manufacturing contracts fell 1.7% from February 2015. Orders for non-military capital goods, excluding aircraft – a proxy for business investments – was down 1% from the same time last year.

Uneven resilience in the U.S. economy shined through a better-than-expected March report from the ISM Non-manufacturing Index. Purchasing managers from the largest segment of the U.S. economy said their companies were expanding for the 74th months in a row. Though still below its 12-month average, the index registered its highest mark since December.

The U.S. trade deficit widened in February for the third month in a row and more than analysts had expected. The Bureau of Economic Analysis said the gap between how much the U.S. sells abroad and buys from elsewhere expanded to $47.1 billion, the biggest deficit in six months. Exports rose for the first time in five months, hampered by a weaker global economy and the strong dollar, which raises prices abroad. Imports grew even more so, led by consumer goods.

American employers had slightly fewer job openings in February, though the number of hires rose to its highest level since November 2006. The Bureau of Labor Statistics said both the number and the rate of quits ticked up in February, suggesting employees are gaining confidence in their ability to find better jobs. 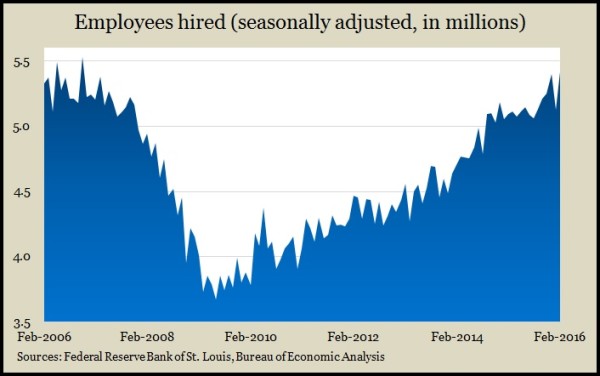 The moving four-week average for initial unemployment claims rose for the third week in a row after reaching a 42-year low in March. According to the Department of Labor, average claims remain below the 49-year average, suggesting employers continue to be reluctant about letting workers go. Eventually, such conditions tend to lead to the job and wage improvements that drive consumer spending, which accounts for more than two-thirds of U.S. economic activity.

The Commerce Department reported that wholesale inventories declined for the fifth month in a row in February as businesses try to align their supply levels with customer demands. Sales fell for the fourth consecutive month, but at a slightly lower rate. As a result, the tell-tale ratio of inventories to sales dipped slightly, though it remained at levels last registered during the recession.