U.S. manufacturers reported a seventh consecutive month of expansion in March, though at a slower pace than a particularly strong February. Purchasing managers surveyed for the ISM Manufacturing Index generally had positive comments about both current business conditions and the outlook. None of the 18 industries represented reported contractions in March. Signs of revived global demand could be easing pressure on manufacturing.

An industry much less dependent on conditions abroad showed continued strength in February. Construction spending hit an annual rate of $1.19 trillion, the highest since April 2006. The Commerce Department said the pace was up 3% from the year before. Unseasonably warm weather boosted building projects. The residential spending rate rose 1.8% from January and 6.2% from February 2016. 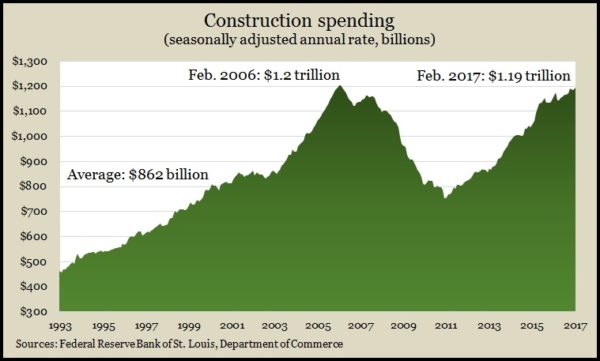 The annual sales pace of motor vehicle sales – a key component of consumer spending – dipped to 16.6 million in March, the third consecutive decline. Manufacturer reports gathered by Autodata Corp. showed sales down 5.4% from the February rate and down 0.3% from the year before, led by U.S.-made cars. Trucks, particularly imports, continued to gain year-to-year.

The U.S. trade deficit shrank to its narrowest gap in four months in February, possibly signaling effects from a warming global economy and weaker dollar. The Bureau of Economic Analysis said the trade gap declined by 9.5% to $43.6 billion following January’s deficit, which was the widest in five years. For February, exports rose 0.2% to the highest level in two years. Imports fell by 1.8%.

In another signal of a manufacturing revival, the Commerce Department reported that factory orders rose 1% in February, their seventh gain in eight months. Excluding the volatile transportation equipment category, orders increased by 5.6% from the same time last year. Another measure in the report suggested a slight decline in business investments, although such orders rose 1.4% from the year before.

Service businesses expanded in March, though at a slower pace than in February. The Institute for Supply Management Non-Manufacturing Index showed the slimmest expansion since August, but the largest sector of the U.S. economy signaled growth for the 87th month in a row. Purchasing managers expressed continued optimism toward business conditions and the economy but voiced uncertainty over the impact from government policies on health care, trade and immigration.

The moving four-week average for initial unemployment claims dropped for the first time in five weeks after hitting a 43-year low. In an ongoing sign that employers overall are reluctant to part with their workers, the Labor Department reported that jobless numbers remained below the 50-year average, where they have been consistently for more than four years.

Employers added 98,000 jobs in March, below the three-month average of 178,000 and fewer than analysts expected. The Bureau of Labor Statistics reported that retailers trimmed payrolls for the second month in a row while hiring at construction sites and factories slowed. Unseasonably warm weather in February followed by wintry conditions in March could explain some of the month-to-month change. The average hourly wage rose 2.7% from March 2016, also a bit lower than recent gains. The unemployment rate – a less reliable indicator of labor conditions – fell to 4.5%, the lowest since May 2006.

Wholesale inventories rose 0.4% in February, behind the 0.6% gain in sales, indicating that businesses continue to adjust their stockpiles to customers’ demands. The Commerce Department reported that in the prior 12 months inventories rose 3.2%, vs. a 9.9% increase in sales. As a result, the inventories-to-sales ratio, which had begun rising in mid-2014 and peaked at recessionary levels early last year, is back down to where it was two years ago.