Manufacturing continued contributing to the modest pace of economic growth in March with the Institute for Supply Management marking the fourth consecutive month of expansion for the sector. The manufacturing pace slackened from February, but improved indicators for hiring and exports offered encouragement for months ahead.

For the second time in three months, factory orders rose in February. More robust than analysts had expected, the increase reported by the Commerce Department suggests continued growth in the U.S. economy through manufacturing, although much of the gain came from the volatile category of commercial aircraft. A proxy for business investments – capital goods orders minus military and aircraft – declined in February, but that followed an extraordinary surge in January.

Auto manufacturers said they sold an annual rate 15.3 million vehicles in March, up 8% from the pace a year ago and the fifth month in a row above the 15 million mark. Domestic vehicle sales continued to outpace imports, according to the trade group Auto Data Corp. An aging fleet of vehicles nationwide has kept car sales steady, which has helped U.S. manufacturing. 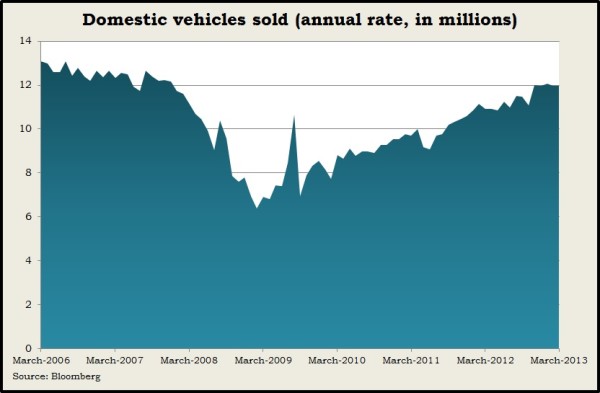 As much as manufacturing has been aiding economic activity, the service sector still represents about 90% of the economy. The ISM non-manufacturing index showed that sector continuing to expand in March, though at a slower pace than February. The non-manufacturing index indicated expansion for the 39th month in a row. Positive signs included growing backlogs and upbeat sentiments from purchase managers about current business conditions.

The moving four-week average for initial unemployment claims rose for the second week in a row, but still hovers around its level of mid-2008, according to the latest Labor Department data. The numbers continue to suggest that  employers overall are reluctant to let workers go, though additional hiring remains spotty.

The March report on payroll jobs and unemployment suggested that U.S. economic growth is still not up to speed. The Labor Department said employers added the fewest jobs in nine months. And even though the unemployment rate dipped to its lowest level since October 2008, it has been stagnant for months and at 7.6% is well above the 6.5% rate targeted by the Federal Reserve. The main reason the unemployment rate is down is not because job seekers have been landing positions but because the labor force keeps shrinking.

The trade deficit shrunk in February, as a cheaper dollar boosted American exports and the U.S. imported the least amount of oil in 17 years. Economists had expected the deficit to widen, but the Bureau of Economic Analysis reported that the trade gap narrowed to the smallest margin since October.