The housing recovery kept bouncing along as new home sales slowed in March for the third month in a row. The Commerce Department reported that the supply of new houses for sale rose to its highest point in six months, though it remained below the level considered necessary for a balanced market. Existing home sales generally outnumber new homes by about 10-to-1.

Another sign of the bumpy housing recovery showed up in February house prices. The S&P Case-Shiller index reported a lower-than-expected 5.4% increase in year-to-year prices for its 20-city composite. All but seven of the cities had slower price growth than in January. By repeatedly outpacing inflation, housing prices have become a deterrent to housing growth, according to an S&P economist.

More hope has been pinned on housing in recent months as the strong dollar and cheap oil have weakened manufacturing as an economic force. A preliminary look at durable goods orders for March suggests the sector is continuing to struggle despite some easing for both oil and the dollar. Military aircraft orders helped keep manufacturing projects up overall. Requests fell for cars, commercial planes and business goods.

Economic growth slowed to its weakest pace in two years as it registered a 0.5% annual rate in the first quarter, according to an advanced estimate of the Gross Domestic Product. The Bureau of Economic Analysis reported that pullbacks in business investments, inventories and federal government slowed the economy despite a better-than-expected 1.9% gain in consumer spending. The Fed’s favorite inflation gauge came in just above the central bank’s long-term target of 2%. After finally recovering its pre-recession high in mid-2011, the GDP has advanced in every quarter but one. 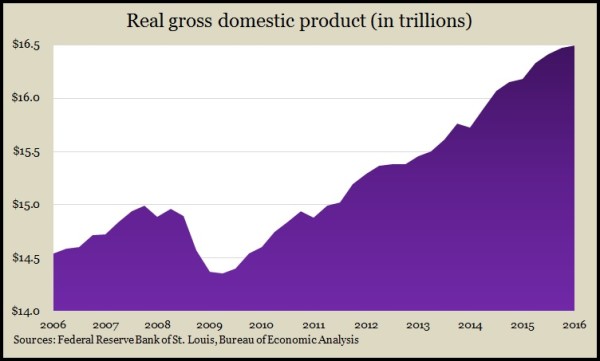 The driver of two-thirds of U.S. economic activity, consumer spending barely budged in March, suggesting ongoing inhibitions by Americans to part with their money. Spending remained low even though personal income rose moderately, the Bureau of Economic Analysis said. As a result, the personal saving rate rose to 5.4% of disposable income, the highest in more than three years. A monthly update of the Fed’s preferred measure of inflation was up 1.6% from March 2015 – below the Fed’s 2% target.

The University Michigan consumer sentiment index continued its gradual decline in April. The index dropped to a reading of 89 from 91 in March and 95.9 in April 2015. A university economist suggested consumers feel fairly confident about their own circumstances but increasingly iffy about the wider economy in part because of the lack of business investments and political campaign rhetoric. Based on the index, the economist said, consumer spending still should rise at a relatively healthy pace of about 2.5% for 2016.