Housing prices continued to far outpace inflation in February, according to data from the S&P CoreLogic Case-Shiller index. The year-to-year 5.9% increase in the 20-city composite index accelerated for the fifth month in a row, and the overall national index has hit an all-time peak each month since November. An economist with S&P said prices are growing faster than any other housing indicator and that affordability has been declining since 2012 because of lack of housing supply.

A leading indicator of consumer spending, consumer confidence dipped in April from a 16-year high in March. The Conference Board said consumers downgraded their assessment of current conditions as well as their expectations of near-term financial prospects, but confidence remains relatively high after a post-election run-up that rivaled dot-com era consumer exuberance. The business research group said its index suggests continued economic growth.

The Commerce Department reported higher-than-expected new home sales in March. The annual rate of 621,000 houses sold rose nearly 6% from the February rate and increased almost 16% from the year-ago pace. March sales fell just shy of the July pace, which was the highest since early 2008. A low inventory of new houses for sale continued to push up prices. The ratio of houses for sale compared to the houses sold showed only enough supply to sustain five months of sales. 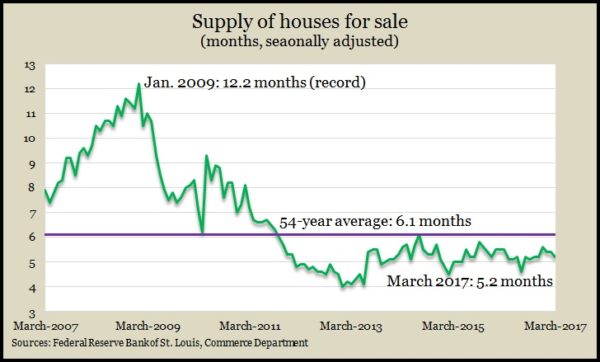 The Commerce Department reported that durable goods orders rose less than analysts expected in March, although excluding volatile demand for transportation equipment, orders declined for the first time since June. Manufacturing has been held back by effects from a strong dollar and weak growth globally, although by some indications the drag has begun to let up. Non-defense capital goods orders excluding aircraft – a proxy for business investment – remained at about the same level as mid-2008.

The moving four-week average for initial unemployment claims fell for the fourth week in a row and stayed 32% below the 50-year average, according to data from the Labor Department. Jobless applications have undershot the long-term level every week since early 2013, a sign that employers remain reluctant to let workers go, which should boost wages and encourage consumer spending.

The National Association of Realtors cited concerns about tight inventory, rising prices and restricted affordability as its pending home sales index fell 0.8% in March. Overall, the index suggests relatively high demand for existing houses, but the trade association noted a lack of participation from first-time home buyers. Still, the Realtors have forecast a 3.5% gain in sales for 2017.

The U.S. economy grew at a 0.7% annual pace in the first quarter, the slowest start to a years since a 1.2% decline in the first three months of 2014, the Bureau of Economic Analysis said. Gross Domestic Product was set back by a weakening in consumer spending, which accounts for 70’% of economic growth. Business inventories also lightened, as did spending by state and local governments. Among the bright spots was a long-awaited increase in business investments. The preliminary data also showed the Federal Reserve’s favorite inflation gauge rose to the Fed’s 2% target.

Considered a leading indicator of consumer spending, The University Michigan consumer sentiment index rose by one tenth of a point in April, with feelings toward current conditions declining slightly and expectations rising a smidge. A university economist said a severe divide in sentiment based on political partisanship has begun to narrow. Based on surveys of the 42% of consumers identifying as independents, spending should rise 2.5% in 2017, but the economist warned that “the partisan extremes will continue to add uncertainty and instability to consumer spending during the year ahead.