The National Association of Realtors said the pace of existing home sales rose in March for the second month in a row. The annual rate rose to 5.6 million houses sold, up 1.1% from February but down 1.2% from March 2017. An economist for the trade group said demand continued to exceed supply in most housing markets, which has been raising prices and discouraging prospective buyers. Inventory declined 7.2% year-to-year for the 34th such drop in a row. The median sale price rose 5.8% from March 2017, the 73rd consecutive gain.

The Commerce Department reported a dramatically faster pace of new home sales in March. The annual rate of 694,000 houses sold rose 4% from February and increased 8.8% from the year-ago pace. The monthly data tend to be volatile but rose for the second month in a row, just behind the post-recession high set in November. Figures showed the inventory of new houses for sale remains relatively low, which housing economists say has been escalating prices and keeping some prospective buyers out of the market. 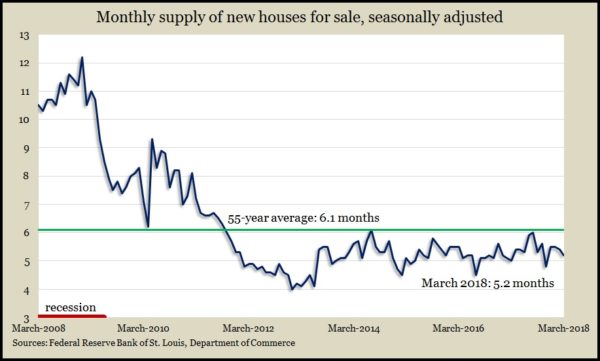 Home prices kept pushing higher in February, according to the S&P CoreLogic Case-Shiller home price index. The composite 20-city index rose 6.8% from the same time last year, accelerating from a 6.4% year-to-year gain in January and surpassing its previous peak in July 2006. A housing economist for S&P said further economic growth and employment gains should continue to fuel higher prices. The national index has had year-to-year gains for 70 months in a row.

The U.S. economy should have “solid” growth in the months ahead, according to the April consumer confidence index from the Conference Board. The business research group said survey respondents indicated that they felt better about both current conditions and the outlook for coming months. The percentage of consumers expecting their incomes to decline in the next few months was at the lowest level since December 2000.

The moving four-week average for initial unemployment claims fell for the first time in six weeks, eight weeks after hitting its lowest level since December 1969. Average jobless applications have remained below the 51-year average every week since early 2013, according to data from the Labor Department. The indicator is one of the most persistent signs of a tight labor market that has been boosting consumer confidence if not quite yet raising wages as much as economists have expected.

The U.S. economy grew at a 2.3% annual rate in the first quarter, the best start to a year since 2015, according to the first of three estimates by the Bureau of Economic Analysis. The pace of the gross domestic product slowed from 2.9% at the end of 2017 mostly because of reduced consumer spending, which grew at a 1.1% rate, vs. 4% in the fourth quarter. Residential investment also slowed in the first three months of 2018, as did state and local government spending. Business spending and inventory buildups accelerated. The preliminary data showed the Federal Reserve’s favorite inflation gauge rising to 1.7% from 1.5% in the fourth quarter but still lower than the Fed’s 2% target.

The Bureau of Labor Statistics said the first-quarter year-to-year gain in employment cost was the highest since the financial crisis in 2008. The bureau’s index showed compensation rising 2.7% since the first three months of 2017 with the cost of wages (which account for about 70% of employment costs) growing 2.7% while benefits rose 2.6%. Economists have been waiting for signs that competitive labor markets will cause wages to rise and fuel more consumer spending, which drives about 70% of U.S. economic growth.

Considered a leading indicator of consumer spending, The University Michigan consumer sentiment index fell in April, though it was up from a mid-month estimate and just below the average for 2017, which was the highest in 17 years. Consumers volunteered opinions on tax law changes (on balance finding them positive) and recent trade policies (negative), and suggested that the long economic expansion is making them wary of future trends. A university economist said the index suggests an annual growth in consumer spending of 2.7%.