The National Association of Realtors said the pace of existing home sales fell 4.9%  in March and was 5.4% weaker than the year before. The annual rate slowed to 5.21 million houses sold. An economist for the trade group said sales were off particularly considering the strength of the job market and a decline in mortgage interest rates since November. The supply of houses for sale rose slightly but remained historically low, which has been pushing prices higher. The median sales price was $259,400, up 3.8% from March 2018, for the 85th consecutive year-to-year gain.

The Commerce Department reported a faster pace of new home sales in March. The annual rate of 692,000 houses sold rose 4.5% from February and was up 3% from the year-ago pace. The monthly data tend to be volatile but rose for the third month in a row to the highest level since November 2017, the post-recession peak. Figures showed the inventory of new houses for sale remained above the long-term average for the ninth month in a row, which has helped keep prices down. The median price in March was $302,700, down 9.7% from the year before. 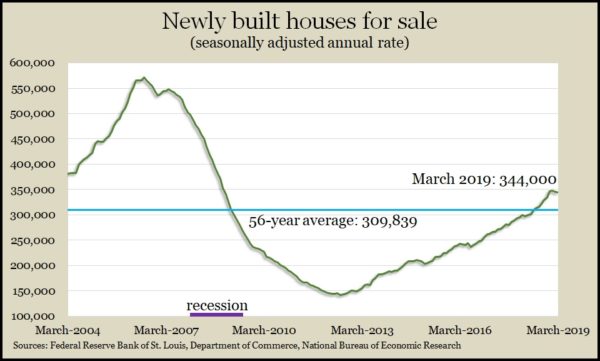 The four-week moving average for initial unemployment claims rose for the first time in five weeks after reaching the lowest point since November 1969. Average jobless applications remained 42% below the 52-year average, according to data from the Labor Department. Benefits filings have been lower than the long-term level every week since early 2013, a sign that employers are reluctant to let workers go, which eventually should boost wages and encourage consumer spending.

Commerce said durable goods orders rose 2.7% in March—the fourth gain in five months—led by demand for commercial aircraft, automobiles and defense goods. Excluding volatile transportation equipment, orders grew by 0.4% for the month and 2.4% from March 2018. Non-defense capital goods orders excluding aircraft—a proxy for business investment—rose for the third month in a row to a record high and was up 2.8% from the same time last year.

The U.S. economy grew at a 3.2% annual rate in the first quarter, the best first quarter in four years, according to the first of three estimates by the Bureau of Economic Analysis. Gross Domestic Product picked up with a strengthening in exports, inventories and government spending and a decline in imports. Consumer spending, which drives about two-thirds of GDP, grew at a 1.2% annual pace, down from 2.5% in the fourth quarter. Business investments grew by 2.7%, down from 5.4% at the end of 2018. The report also showed the Federal Reserve’s favorite inflation gauge dropping to 1.3% from 1.8% in the fourth quarter, still lower than the Fed’s longstanding 2% target.

Considered a leading indicator of consumer spending, the University Michigan consumer sentiment index changed little  in April and has been moving sideways for about a year and a half. A record high 60% of consumers said they expect to be better off financially in the next five years. The economist who directs the survey said that for the last 28 months, sentiment has been at its highest level since the end of the 1990s economic expansion.