Although still in the recovery mode, existing home sales dipped in March to a yearly pace just below 5 million. A low inventory and strict lending policies are holding sales back according to the National Association of Realtors. But low mortgage rates and affordability are goosing demand, resulting in higher year-to-year median sale price for the 13th month in a row. 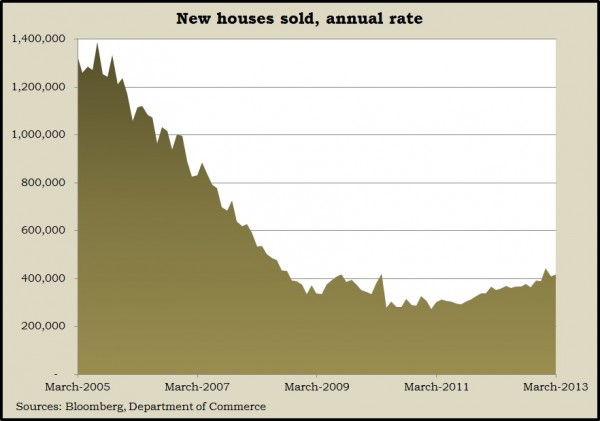 Signs of global economic slowdown were hinted from a Commerce Department report on orders for durable goods March. Though a volatile indicator month to month, the report showed a relatively broad softening in orders, especially commercial aircraft. Slights gains occurred for motor vehicles and business investments.

The moving four-week average for initial unemployment claims dropped for the first time in five weeks, remaining at levels before the 2008 financial collapse.  Labor Department data suggest employers have been reluctant to let workers go, though hiring levels still aren’t back to where they were before the recession.

The economy grew at an annual rate of 2.5% in the first quarter, slower than expected but up from 0.4% in the previous quarter, according to the first of three estimates from the Bureau of Economic Analysis. By comparison, the Gross Domestic Product has advanced an average 2.1% per quarter in the current expansion and an average 3.1% in the last 50 years. Better-than-expected consumer spending led the first-quarter growth, supported by a lowering in the personal saving rate. Government spending declined for the 10th time in 11 quarters. A key measure of inflation remained well within the comfort zone set by the Federal Reserve, which is watching for the point at which low interest rates spark higher prices.

April consumer sentiment advanced slightly from earlier in the month but dropped overall from March as Americans continued feeling lackluster toward current conditions and especially future prospects. The report from the University of Michigan and Thomson Reuters showed sentiment slipping or the first time since December.