Economists from the Conference Board read optimistic signs from the third monthly increase in their leading economic indicators. The March barometer showed growing economic momentum and traction in the rebound from winter. In particular, the business research organization cited a “much less negative” consumer outlook but also questioned whether gains in the labor market could sustain economic growth beyond the summer.

Although still in the recovery mode, existing home sales dipped in March for the seventh time in eight months, suggesting the post-recession peak in July may be as good as it gets for a while. Low inventory and rising prices are holding sales back, according to the National Association of Realtors. The trade group expects the pace of sales to pick up with warmer weather and continued job gains.

Another measure of the housing’s comeback, new-home sales, slipped in March, sinking to the lowest annual pace in eight months, the Commerce Department reported. The median sale price for a new house jumped nearly 13% from March 2013. Meanwhile, the supply of new houses for sale was at the highest level since October 2011. 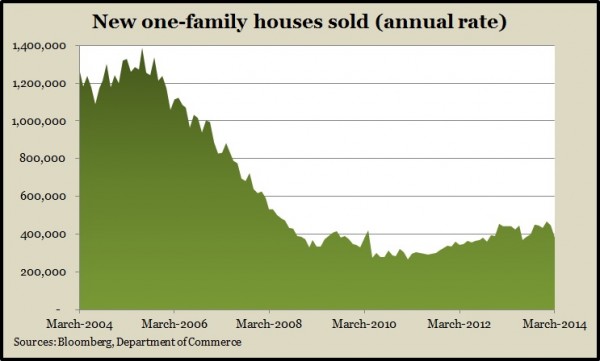 Signs of gaining manufacturing momentum emerged from a Commerce Department report on orders for durable goods in March. Though a volatile indicator month to month, the report showed a relatively broad advance in orders for the third month in a row, excluding transportation, which led the gains. Also, capital goods orders minus military and commercial aircraft grew for the second time in three months, a positive indicator of business investment.

April consumer sentiment advanced to 84.1, the highest level since the recovery high of 85.1 in July. The report from the University of Michigan and Thomson Reuters showed the greatest contentment with current conditions since before the recession. Expectations for six months hence also rose in April, suggesting consumers could be expressing their rosier sentiment through increased spending.