Social-distancing restrictions have begun to affect existing home sales, which declined 8.5% in March, according to the National Association 0f Realtors. The trade group said houses sold at a seasonally adjusted annual rate of 5.27 million in March, and there were signs that fewer sellers were listing their houses as a result of the COVID-19 pandemic. The pace of home sales was 0.8% ahead of the same time last year, but an economist for the Realtors said he expects declines to continue.

The four-week moving average for initial unemployment claims reached yet another record high as a result of job displacements from the COVID-19 virus. The Labor Department said the four-week average rose to 5.79 million applications, reflecting more than 23 million new claims filed in the preceding four weeks. Going back five weeks, the total exceeded 26.4 million. 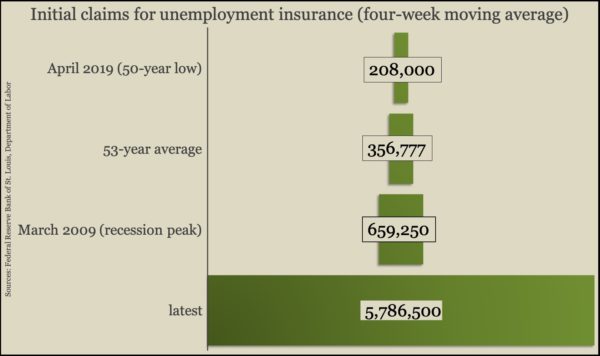 Declines in the U.S. housing market showed in March new home sales, which fell 15.4% from the seasonally adjusted annual rate in February. The departments of Commerce and Housing and Urban Development jointly reported that an annual rate of 627,000 new single-family houses sold in March, down from the post-recession high of 677,000 in January but still above the 619,000-house pace just as the Great Recession began. March sales were less than half the all-time peak of nearly 1.4 million houses sold in July 2005.

A key measure of manufacturing prospects, durable goods orders, declined 14.4% in March. It was the largest collapse in nearly 30 years of data from the Commerce Department, aside from a one-month swing in aircraft orders in 2014. The setbacks were broad, led by the volatile transportation category, including commercial aircraft and automobiles. Military orders rose. In releasing the report, Commerce acknowledged that many businesses have cut back or closed because of the COVID-19 pandemic.

The University of Michigan said its consumer sentiment index dropped to 71.8 in April from 89.1 in March and 97.2 in April 2019. Consumers’ feelings toward current conditions declined much more than their expectations, offering potential for economic rebound. Consumer spending makes up 70% of U.S. business activity. A Michigan economist said consumer reactions to the reopening of businesses would be critical, and if activities resume too soon and restrictions need to be imposed again, it could trigger a “deeper and more lasting pessimism.”