The National Association of Realtors reported higher-than-expected existing home sales in March, rising to the fastest pace in 18 months. The trade group said low interest rates and stable jobs helped fuel confidence among both home buyers and sellers, who contributing to the inventory of houses on the market. The median sales price rose from the year before for the 37th month in a row. And for the third consecutive month, first-time buyers accounted for 30% or more of the sales.

Another measure of the long, choppy housing comeback, new-home sales, slipped more than analysts expected in March, sinking to the lowest annual pace since November. The Commerce Department reported the median sale price for a new house fell 1.3% from March 2014. Meanwhile, the supply of new houses for sale was at the highest level in four months. 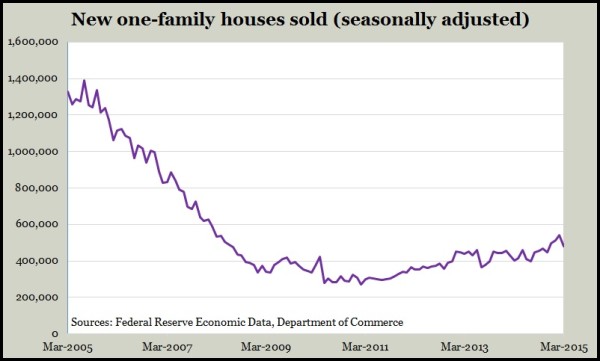 Signs of soft manufacturing momentum emerged from a Commerce Department report on orders for durable goods in March. Though a volatile indicator month to month, the report showed the seventh consecutive monthly decline in non-military capital goods orders minus aircraft. That’s considered a sign of weak investments by U.S. businesses.