The four-week moving average for initial unemployment claims fell to its lowest level in more than a year, dropping below the pre-pandemic high. The average declined for the 10th time in 11 weeks, reaching 651,000, down from a record 5.3 million a year ago but still 75% higher than the long-term average dating back to 1967. Despite recent progress in the job market, the Labor Department reported 17.4 million claims for jobless benefits in the latest week, up from 16.9 million the previous week. 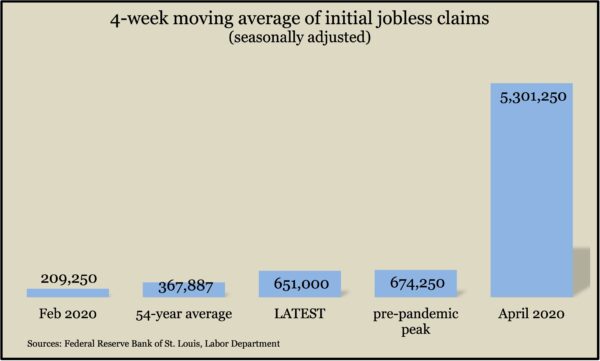 As existing home sales declined in March, for a second month in a row,  the median price for a house rose a record 17.2% from the year before, the 109th consecutive year-to-year gain, according to the National Association of Realtors. The trade group said near-record lows of inventory combined with a strengthening economy and low mortgage rates continued to result in an imbalance between supply and demand. Inventory was down 28.2% from March 2020. The typical time on the market for houses sold in March was 18 days, the lowest in nearly 30 years of data.

The Conference Board said its index of leading economic indicators rose 1.3% in March, more than offsetting a 0.1% decline in February. All 10 0f the indicators tracked by the business research group contributed to the index gain, suggesting increasing momentum for the economy. The group credited continued COVID-19 vaccinations, some lifting of pandemic restrictions and fiscal stimulus as fueling what they forecast could be 6% growth in the U.S. economy in 2021.

Housing remained a bright spot in the economic recovery, with the annual rate of new home sales rising in March to the highest level since August 2006. The Commerce Department said the inventory of new houses for sale continued to hover at record lows. One sign of growing demand for new houses is that an increasing share of sales is for houses on which building has not yet started. In March, 34% of the new houses sold were not yet under construction, compared to 29% in all of 2020 and 28% in 2019.