Signs of a continued bumpy housing recovery came from a Commerce Department report showing the annual pace of housing starts declining more than expected in March, though rising from the year-ago rate. Builders began working on houses at the slowest pace since October. Single-family residences, which account for 70% of the starts, remained below the 56-year average. Building permits, which suggest upcoming housing starts also fell, led by applications for multi-family units. 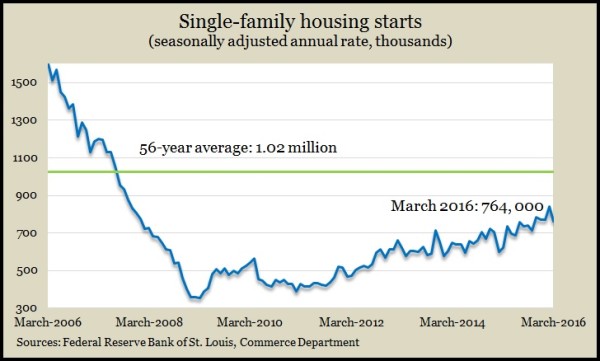 The National Association of Realtors reported higher-than-expected existing home sales in March. The trade group repeated complaints of depressed inventory and rising prices suppressing sales. The median price rose 5.7% from March 2015 for the 49th consecutive year-to-year increase. Existing home sales have been outnumbering new home sales by about 10-to-1.

The moving four-week average for initial unemployment claims fell for the second week in a row, approaching a recent mark that was the lowest level since late 1973. Labor Department data show claims staying 28% below the 49-year average, suggesting employers’ continued reluctance to let workers go. Layoffs have been below the long-term average every week since January of 2013.

The Conference Board’s index of leading economic indicators rose less than expected but improved for the first time in three months. Gains in stock prices offset the slump in building permits. Otherwise the business research group reported a broad but mild advance in other indicators, which suggests “slow, although not slowing growth” in coming quarters and a modest expansion for the year.