Led by a record 8.6% rebound in utilities output, industrial production increased in March. The Federal Reserve reported that the key manufacturing component declined for the first time since August as production sagged for automobiles, housing supplies and business equipment. The surge in utilities production accompanied a return to more seasonal weather after an extraordinarily warm February. Capacity utilization rose to 76.1% still below the all-time average of 79.9%, suggesting that a run-up in inflation is not imminent.

The pace at which Americans started building houses slowed in March. According to the Department of Commerce, housing starts were on a 1.2 million unit annual pace, down 6.8% from February, which was aided by warm weather. The March rate was up 9.2% from the year before. Single-family housing starts also rose from March 2016 and are important to filling the supply needed to maintain housing growth overall. Single-family houses under construction rose to the highest rate since September 2008. The same report showed an increase in the rate of building permits, suggesting the housing recovery has wind in its sales. 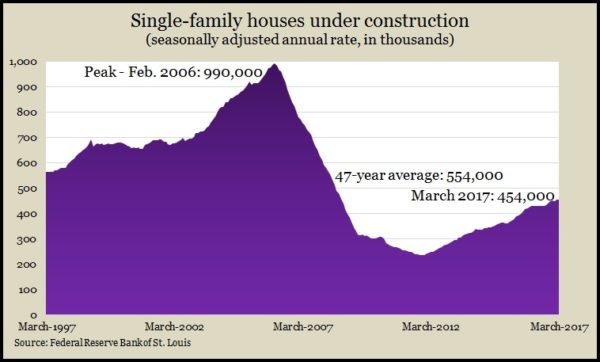 The Federal Reserve Beige Book of anecdotal economic observations shows continued moderate to modest expansion across most of the Fed’s 12 districts. The report, covering mid-February through the end of March, cited increased reports of tighter labor markets and modest wage growth as well as generally positive outlooks despite some uncertainty over government policies – particularly relating to trade.

The moving four-week average for initial unemployment claims fell for the third week in a row, reaching the lowest level in five weeks, a persistent sign that employers are reluctant to let go of their workers. Jobless claims remained more than 30% below the 50-year average, where they have each week for more than four years, according to Labor Department data.

The Conference Board said its March index of leading economic indicators suggests continued moderate economic growth with possible acceleration later this year if consumer spending and investment pick up. The index rose 0.4% from its February reading, led by manufacturing orders and the spread in interest rates.

Despite complaints about lack of supply, the National Association of Realtors reported a stronger-than-expected 4.4% increase in existing home sales in March. The trade group said the annual pace of sales eclipsed 5.7 million houses, up 5.9% from March 2016. Inventories fell from the same time a year ago, completing the 22nd consecutive month of inventory declines. The median sales price grew 6.8% from March 2016, which marked the 61st consecutive year-to-year increase in prices.