Consumers pushed retail sales higher than analysts expected in March, following a slight decline in February. The Commerce Department said sales rose 0.6%, up from a 0.1% slip in February, with eight of 13 retail categories making gains. Year-to-year, retail sales grew 4.5%, beating the long-term average of 4.3%, led by gas stations and online retailers. Consumer spending accounts for about 70% of the U.S. gross domestic product.

In a separate report, Commerce said business inventories rose 0.6% in February, outpacing sales, which gained 0.4%. Increased inventories contribute to economic growth, but companies don’t want supply to get too far ahead of demand or they could risk wasting production. Since March of 2017, inventories rose 4% while sales gained 5.8%.

The Federal Reserve reported that industrial production rose 0.5% in March, higher than analysts expected but half the gain in February. Utilities bounced back 3% after a weather-related decline in February. Manufacturing output advanced slightly. Mining production continued to grow through expanded oil and gas extraction. For the year, industrial production increased 4.3%, down a little from February, which was the largest year-to-year gain since 2011. The same report showed capacity utilization, a leading indicator of inflationary pressure, rising but still well below its long-term average.

The pace of home building quickened in March, according to the Department of Commerce. Housing starts were on a 1.32 million-unit annual pace, up 2.5% from February’s pace and up 5.5% from March 2017. The rate remained above recessionary levels, but new single-family houses stayed below the 59-year average as it has since July 2007. The pace of building permits for future housing construction rose closer to January’s post-recession peak, with apartments of five or more units accounting for all of the growth. 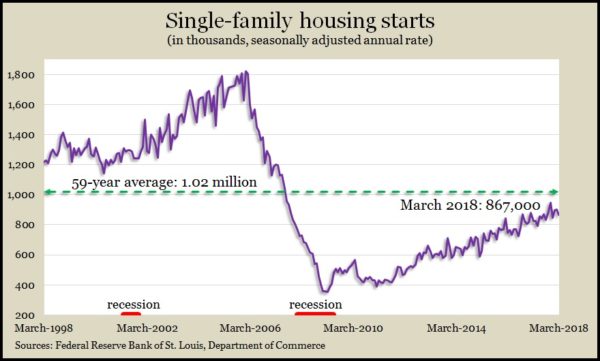 The moving four-week average for initial unemployment claims rose for the fifth week in a row and the sixth time in the seven weeks since claims hit their lowest level in 49 years. The indicator of firings and layoffs remains 35% below the 51-year average, where it has been each week since the beginning of 2013, according to Labor Department data. That suggests employers continue to be reluctant to let workers go, a sign of labor market strength that should help fuel consumer spending.

The Conference Board said its index of leading economic indicators rose in March, though at a much slower pace than in February and January. Despite the slowdown, the business research group said its six-month gauge suggests “continued solid growth” for the rest of the year for the U.S. economy.