Housing prices continued to climb at a faster rate in January. According to the S&P CoreLogic Case-Shiller home price index, prices rose 11.1% for the 12-city composite since January 2020. That was up from a 10.2% year-to-year price increase in December.  Historically low housing inventory and historically low mortgage rates have combined for a strong market for sellers.

The Conference Board said its consumer confidence index rose in March to its highest point since the COVID-19 pandemic plunged the economy into recession a year ago. The business research group said attitudes toward both current conditions and the near-term outlook suggested increased momentum toward stronger economic growth in coming months.

U.S. labor market conditions continued to improve, according to Labor Department data showing the four-week moving average for initial unemployment claims dropping to its lowest level in more than a year. At 719,000, though, the number of new applications remained more than double the average since 1967.

The Institute for Supply Management said its manufacturing index indicated expansion in March for the 10th month in a row and at the fastest pace in that streak. Survey respondents cited strong consumer demand with supply-side concerns that included logistical issues, lack of skilled labor and rising costs for raw materials.

Extraordinary winter storms in the South contributed to a slowdown in  construction in February. The Commerce Department said the annual pace of construction spending declined 0.8% from January but was 5.3% above the year-ago rate. Residential spending dipped 0.2% from the month before but was 21.1% ahead of where it was in February 2020.

U.S. employers added 916,000 jobs in March, the biggest gain in seven months, though still 8.4 million positions shy of where they were before the pandemic. The Bureau of Labor Statistics jobs report showed the unemployment rate dropping to 6% from 6.2% in February. It reached as high as 14.8% in April but before the pandemic was at a 50-year low of 3.5%. 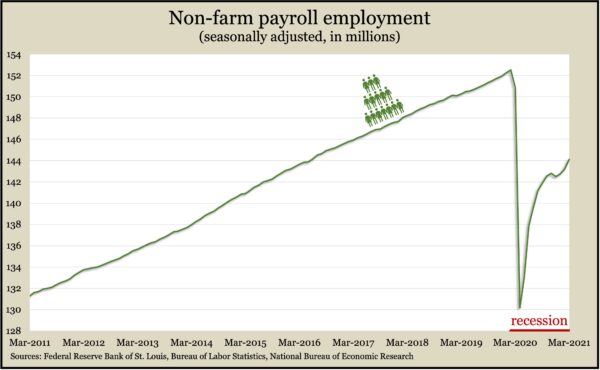