The broadest measure of inflation declined in March for the first time in four months, led by a 4.4% drop in gasoline prices, the Bureau of Labor Statistics reported. The Consumer Price Index rose only 1.5% in the last 12 months, the lowest year-to-year rate in a year and well below the point at which the Federal Reserve has said it would reconsider its monetary stimulus efforts.

Signs of a continued housing recovery came from a Commerce Department report showing housing starts poking past the annual rate of 1 million in March for the first time in nearly five years. Mixed news from the report included the fact that most of the recent housing growth has been in multi-family units, not single-family houses. Also, the pace of new building permits, which offer an indication of future housing plans, has been trending down. 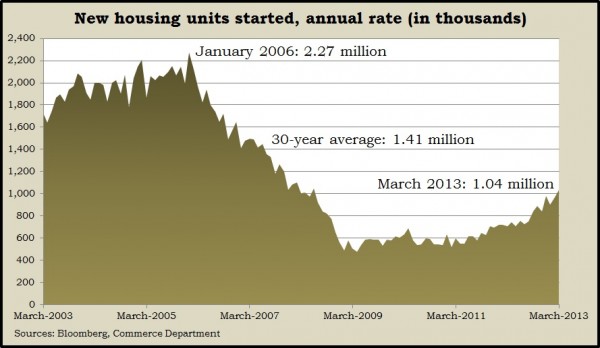 The Federal Reserve said industrial production rose more than analysts expected in March, but mostly because colder weather boosted utilities’ output. Production from factories and mines actually slipped for the month, suggesting softer economic growth ahead for the industrial sector. Similarly, the use of the nation’s production capacity rose to the highest point since July 2008, but it could be short-lived if slower growth in factories and mines continues.

The moving four-week average for initial unemployment claims rose for the fourth week in a row but remained below the average since 1967. Data from the Labor Department show jobless claims hovering around the level of five years ago, before the financial collapse, suggesting employers are reluctant to let workers go. Still, claims are trending up – even if slightly – and hiring has been stingy.

Slow economic growth should continue even though the index of leading economic indicators dipped in March for the first time in seven months, according to the Conference Board. Weakened consumer confidence and fewer housing permits offset improved financial components of the index. An economist for the business research group said federal spending cuts and slow income growth are making consumers nervous and demand weak.