With consumer spending driving about 70% of the U.S. gross domestic product, a record decline in retail spending began to suggest the magnitude of fallout from the COVID-19 pandemic. The Commerce Department said spending at stores fell 8.7% in March, with eight of 13 retail categories showing lower sales. Among the businesses suffering from closures and widespread orders to shelter in place were restaurants and bars, car dealerships, gas stations and clothing stores. As Americans prepared to hunker down at home, sales rose at grocery stores, general merchandisers and online retailers. 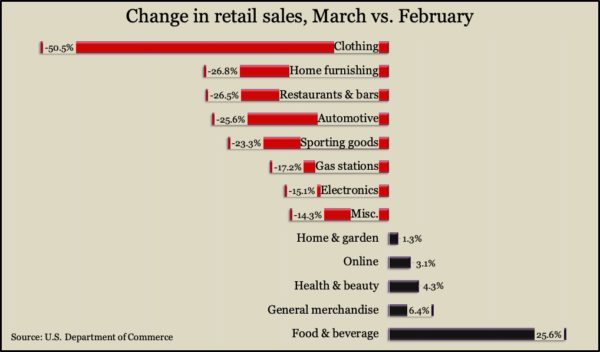 Amid factory closings and falling demand, U.S. industrial production declined 5.4% in March, the most since the wind-down from military manufacturing in World War II. According to the Federal Reserve, factory output dropped 6.3% to the lowest level since the end of 2011. Capacity utilization, a measure of economic health and potential inflation, fell to its lowest level in nearly 10 years. The utilization rate of U.S. factories, mines and utilities has been below its long-term average since the middle of the Great Recession.

The four-week moving average for initial unemployment claims reached another record high as a result of job displacements from the COVID-19 virus. The Labor Department said the four-week average rose to 5.5 million applications, reflecting 22 million new claims in the preceding four weeks. The previous four-week record was 2.6million in the fall of 1982.

The U.S. housing market declined in March, according to volatile figures on housing starts and building permits. The Commerce Department reported that both measures fell to their lowest annual rates since July after reaching post-recession highs in January. Builders started 856,000 single-family houses in March, down 17.5% from the February rate and up 2.8% from March 2019.

The Conference Board said its index of leading economic indicators plunged 6.7% in March, the most in 60 years of data. The business research group described the “unprecedented and sudden deterioration” as broadly based, a result of pandemic-related shutdowns and led by the spike in jobless claims and plunge in stock prices. The Conference Board said its index shows the U.S. economy facing “a very deep contraction.”