In another sign that the Federal Reserve can afford continued patience in raising short-term interest rates, wholesale inflation remained low in March. The Bureau of Labor Statistics said the Producer Price Index gained 0.2% from February, the first monthly rise since October, as energy prices increased for the first time in nine months. On a 12-month basis, inflation fell for the second month in a row.

A prime sign of consumer spending, which drives 70% of U.S. economic activity, rebounded less than expected in March as retail sales rose 0.9%. The Commerce Department report showed a 0.5% decline in February that was partly related to severe winter weather. Sales rose in nine of 13 categories, led by motor vehicles, building supplies and furniture. Year-to-year, sales rose 1.3%, less than one-third of the long-term pace. 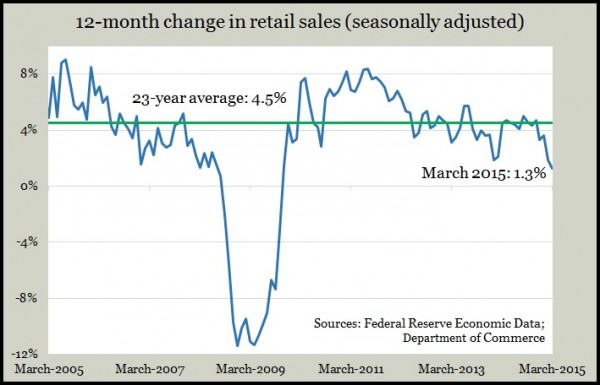 In a separate report, Commerce said business inventories increased slightly in February, even though sales barely budged. The inventories-to-sales ratio rose to its highest level since the Great Recession, suggesting demand has to catch up with supplies before more hiring and capital investments are warranted.

Largely because of improved weather and adjustments to a glut of low-priced oil, factories, mines and utilities together reduced output in March. The Federal Reserve said industrial production declined for the third time in five months. Utilities produced less after ramping up for severe weather in February. Factory output gained a smidge for the first time since November. The telltale capacity utilization rate – including factories, mines and utilities – sank to the lowest point in 17 months, indicating less pressure on inflation.

Signs of a continued bumpy housing recovery came from a Commerce Department report showing the annual pace of housing starts rising less than expected in March, though rebounding from a weather-related dip in February. Builders began working on 926,000 houses, led by single-family residences. The pace of new building permits, which offers an indication of future housing plans, declined 5.7% from February’s pace but looked more encouraging than the year before.

The moving four-week average for initial unemployment claims fell slightly for the first time in four weeks but remained near the lowest level in 15 years. Data from the Labor Department show jobless claims continuing to stay under the 48-year average, signaling employers’ enduring reluctance to let workers go.

The broadest measure of inflation, the Consumer Price Index, inched ahead in March with the second consecutive monthly gain in energy prices. The Bureau of Labor Statistics said gasoline prices rose 3.9% last month but are down 29.2% from the same time last year. Since March 2014, inflation overall fell 0.1% – the second decline in the last three months. But if you factor out volatile food and energy prices, the cost of living rose 1.8%, which is closer to the Fed’s target rate of 2%.

Moderate economic growth continued in March, according to the Conference Board’s index of leading economic indicators. The business research group lowered its estimates for growth in February and said recent weakening data on building permits, work hours and factory orders may be signaling that the pace of growth may be slowing in coming months.