The broadest measure of inflation showed prices rising 0.6% in March, the highest since August 2012, mostly because of higher gas prices. The Bureau of Labor Statistics said the 9.1% increase in gas accounted for about half of the monthly gain in its Consumer Price Index. Year to year, headline inflation rose 2.6% with gas prices up 22.5% as the nation has hit the road again a year after widespread shutdowns from the COVID-19 pandemic. Excluding prices for volatile food and energy products, the core CPI rose a more moderate 0.3% from February and was up 1.6% from March 2021, staying below the Federal Reserve’s sweet spot of 2% inflation. 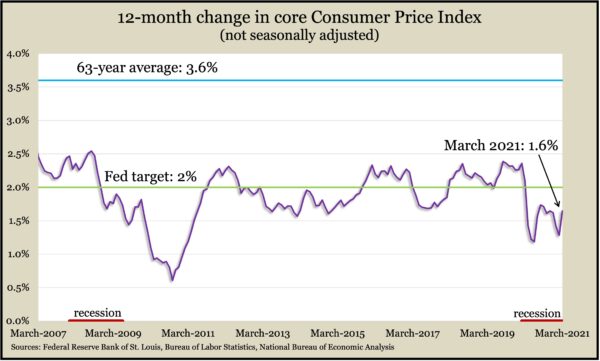 The four-week moving average for initial unemployment claims fell for the ninth time in 10 weeks to its lowest level in 13 months, signaling continued progress in the U.S. labor market recovery. Claims averaged 683,000 in the most recent reading from the Labor Department, down from a record high of 5.3 million last April but still up from a 53-year low of 209,250 just before the pandemic. Altogether, 16.9 million Americans claimed jobless benefits in the most recent week, up from 8.2 million the year before.

With consumer spending driving about two-thirds of the U.S. gross domestic product, a 9.8% rebound in retail spending in March offered further evidence of robust economic growth. Each of 13 retail categories increased sales in March, seven at double-digit rates, the Commerce Department said. Retail sales rose 14.6% above their pre-pandemic level. However, the recovery among categories remained uneven, with bars and restaurants still 5% behind their sales in February 2020 while online retailers were up 35%. 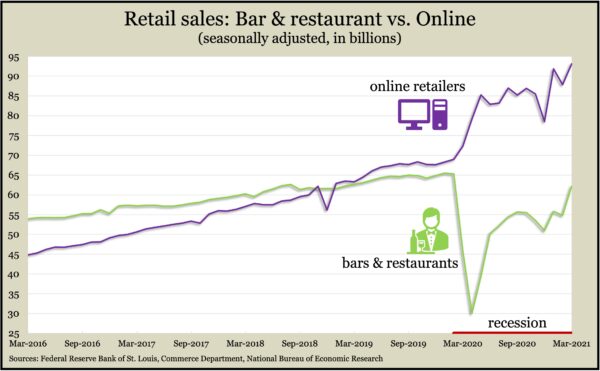 A report by the Federal Reserve showed industrial production rose 1.4% in March, rebounding from a 2.6% decline in February caused by winter storm disruptions to manufacturing. The output from utilities fell in March after unseasonably warm weather followed an extraordinarily cold February. Overall industrial production remained 3.4% below pre-pandemic output. Capacity utilization, a measure of potential inflation, rose for the seventh time in nine months, but at 74.4%, the rate stayed below its mark in February 2020 as well as its long-term average of 79.6%, which hasn’t been reached in nearly 13 years.

Historically low mortgage rates, high demand and low inventory propelled continued growth in U.S. housing starts and building permits in March. Both measures remained near 14-year highs. Plans for and construction of single-family houses in particular are key to furthering the housing boom. The annual pace of single-family permits rose for the 10th time in 11 months to 1.2 million units. The number of single-family units under construction and the number of completions rose to their highest levels since late 2007.

A preliminary April reading of consumer sentiment suggested no change in expectations since March but improved opinions toward current economic conditions. The survey-based index from the University of Michigan reached its highest point in more than a year and suggests continued growth in consumer spending. A university economist who runs the index said consumers will keep spending as long as they feel supported by employment and incomes. He said concerns about the pandemic and inflation will temper drawdowns of savings.