In another sign that the Federal Reserve can afford continued patience in raising short-term interest rates, wholesale inflation remained low in March. The Bureau of Labor Statistics said the Producer Price Index retreated 0.1% from February, the fifth decline in the last eight months. The price of services and food held back the index. Energy prices rose for the first time since November. More telling, the 12-month inflation rate sank 0.1%, although it rose 0.9%, excluding volatile energy and food prices. That core gain fell short of the Federal Reserve Board’s general target of 2% inflation. 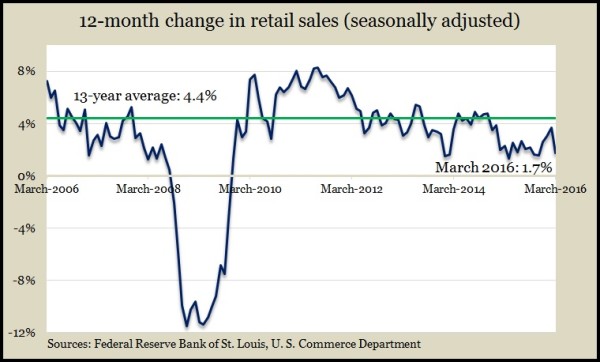 In a separate report, Commerce said business inventories declined slightly in February but not as much as sales. The inventories-to-sales ratio remained at its highest level since the Great Recession, suggesting companies are still overestimating demand, which tends to hamper further growth in production and hiring.

The broadest measure of inflation, the Consumer Price Index, inched ahead in March, rising for the first time in four months. The Bureau of Labor Statistics said gasoline prices rose 2.2% last month, also the first increase since November, although gas is down nearly 21% from March 2015. In the last 12 months, inflation has risen 0.9%, or 2.2% excluding the volatile food and energy prices. Although it’s not the Fed’s preferred measure of inflation, it’s closer to the central bank’s sweet spot for sustainable economic growth.

The moving four-week average for initial unemployment claims fell for the first time in four weeks, when it hit the lowest point since December 1973. Data from the Labor Department show jobless claims continuing to stay under the 49-year average, signaling employers’ enduring reluctance to let workers go. That should help secure jobs and raise pay, which tend to fuel consumer confidence and spending.

Although oil prices have started to rebound and the strong dollar to weaken, the Federal Reserve reported lower industrial production data in March, the fifth fall in six months. Mining output was down 12.9% from the year before and utilities declined 7.7%. Manufacturing eked out a 0.4% year-to-year gain, but fell for the second month in a row, largely because of slower automotive production. The telltale capacity utilization rate – including factories, mines and utilities – sank to the lowest point since August 2010, indicating much less pressure on inflation.