U.S. employers continued to post job openings in February, the Bureau of Labor Statistics reported. The 5.7 million open positions rose 2.1% from January, remaining in a narrow range of unfilled jobs reported in the last year. Job openings hit a record 5.9 million in July. The numbers of hires and separations have fluctuated even less. The number of quits remained the highest since before the 2001 recession, suggesting worker confidence in getting re-employed. Comparing the number of openings with the number of workers who are counted as unemployed shows a gap of about 1.8 million job seekers, although workers’ qualifications don’t necessarily match up with job requirements. 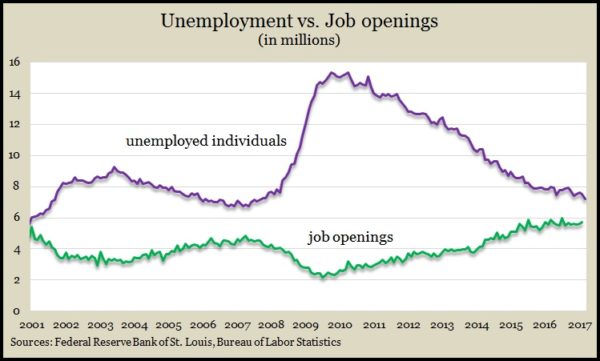 In another sign that the Federal Reserve can afford continued patience in raising short-term interest rates, wholesale inflation remained low in March. The Bureau of Labor Statistics said the Producer Price Index retreated 0.1% from February, the first decline in seven months, led by a 2.9% drop in energy prices. Excluding energy and food, the core index gained 0.1% in March and rose 1.7% in the last 12 months, which was down from a 1.8% year-to-year rate in February, keeping it short of the Fed target of 2% inflation.

The moving four-week average for initial unemployment claims fell for the second week in a row and remained 31% below the 50-year average. Data from the Labor Department show jobless claims staying under the long-term average every week since the beginning of 2013, signaling employers’ enduring reluctance to let workers go. That should help secure jobs and raise pay enough to fuel consumer confidence and spending.

The University of Michigan said its preliminary consumer sentiment reading for April indicated further optimism, especially based on the highest rating since 2000 for Americans’ feelings toward current conditions. Political partisanship has split consumers’ confidence in future finances, and though such opposing sentiments appear to be converging over time, a university economist said they could create volatility in spending, which drives about 70% of economic activity.

The broadest measure of inflation, the Consumer Price Index, retreated in March for the first time in 13 months. The Bureau of Labor Statistics said gasoline prices dipped 6.2%. The core inflation rate, which excludes volatile energy and food prices, also fell unexpectedly with broad price declines. Year-to-year, the CPI rose 2.4%, boosted by a 10.9% rise in energy prices. The core rate rose 2% from March 2016, the lowest since Nov. 2015.

A prime sign of consumer spending, inched backward in March for the second month in a row as retail sales dropped 0.2%. The Commerce Department reported lower sales in six of major 13 categories, including gas stations, which fell from lower prices. Car dealers, home-and-garden centers and eateries also had lower sales. Year-to-year, retail sales rose 5.2% vs. a 4.4% historical average.

In a separate report, Commerce said business inventories rose slightly more than sales in February but not enough to raise the inventories-to-sales ratio, which has been near recessionary levels. Year-to-year, inventories rose 2.8% vs. a 7.1 gain in sales, illustrating how businesses have been working to more closely align supplies with customers’ demand.