The Commerce Department reported that wholesale inventories shrank in February, surprising analysts and suggesting that producers are trying to align their stockpiles with declining demand. At the same time, wholesale sales rose more than expected, resulting in a lower ratio of inventories to sales, which indicates manufacturers will have to step up production quicker if sales continue higher.

Employers had more job openings in February than any month since May 2008, the Bureau of Labor Statistics said. The 3.6 million openings show a gradually growing demand for workers but still remains below the peak of 4.7 million before the recession. The number of workers quitting their jobs was the highest since October 2008, a sign that employees have more confidence in getting new jobs. 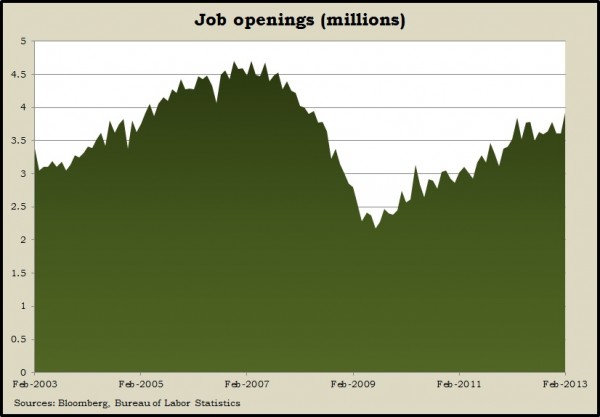 One barometer of the global economy is demand for commodities, which can affect prices at the wholesale level. The primary measure of that is the Labor Department’s Producer Price Index, which lost ground in March, particularly because of lower gasoline prices. Even without volatile food and energy costs, wholesale inflation rose 1.7% from the year before, suggesting not enough pressure on prices yet to warrant Fed cuts in monetary stimulus.

Blame it on lower consumer confidence or delayed income tax refunds or higher payroll taxes, but retail sales declined in March. The Commerce Department report disappointed analysts, who were expecting no change in sales from February. Lower gasoline prices contributed to the sales decrease, but seven of 13 retail categories fell.

With consumer spending driving 70% of America’s gross domestic product, analysts keep an eye on consumer sentiment as an indication of economic mood swings. A preliminary April survey showed consumers turning less optimistic than in March. The index from the University of Michigan and Thomson Reuters dipped from 78.6 to 72.3, the lowest measure since July. Consumers expressed lost confidence both in current conditions as well as their outlook for six months from now.

As with wholesalers, other businesses aligned supplies with expectations of diminished demand in February, according to the Commerce Department. Business inventories rose just 0.1% in February, the smallest gain since June. Sales rose 1.2% in February, resulting in a leaner stockpile heading into the spring.