The Federal Reserve reported that consumer credit rose higher than analysts expected in February, following a January rise that was greater than initially estimated. Borrowing for cars and college again led the types of debt accumulated. Meanwhile, revolving credit – mostly credit card debt – contracted for the second month in a row and the third time in four months. That may be a sign that consumers aren’t feeling very confident or footloose about spending. 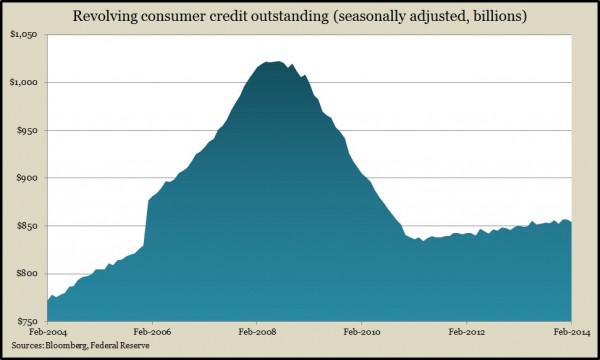 The Commerce Department reported that wholesale inventories rose 0.5% in February, just as analysts expected, up for the eighth month in a row. Wholesale sales outpaced inventories growth, rebounding from a weather-effected dip in January. The ratio of inventories to sales remained at the highest level since the first half of 2013, suggesting businesses need to let demand catch up with supplies before adding production or employees.

The moving four-week average for initial unemployment claims dipped for the fifth time in six weeks, dropping to the lowest level since September, which was the lowest point since May 2007, according to the Department of Labor. Average claims remain below the 47-year average, suggesting employers continue to hang on to workers even while hiring hasn’t increased much.

One barometer of the global economy is demand for commodities, which can affect prices at the wholesale level. The primary measure of that is the Labor Department’s Producer Price Index, which gained more than analysts expected in March. But the Bureau of Labor Statistics report showed year-to-year inflation up 1.4% from the year before, even excluding food and energy costs. That’s still well below the pace that the Fed has said it considers healthy for sustainable economic growth.

A preliminary April survey showed consumer sentiment rising to the highest level since the post-recession peak in July. The index from the University of Michigan and Thomson Reuters climbed to 82.6 from 80 in March, indicating improved feelings toward both current conditions and future prospects. With consumer spending driving 70% of America’s gross domestic product, analysts keep an eye on consumer sentiment as a sign of economic mood swings.