Demand for workers remained historically high through the end of February, according to the Bureau of Labor Statistics. The number of job openings approached 6.9 million, the BLS reported, down 1.8% from January but still near the all-time high of 7.5 million set in January 2019. In the 12 months that ended Feb.29, employers added a net 2.4 million jobs, according to the report, which offers a snapshot before mass disruptions from the COVID-19 pandemic. In contrast, in just one week in late March, 6.6 million Americans filed first-time claims for unemployment insurance. 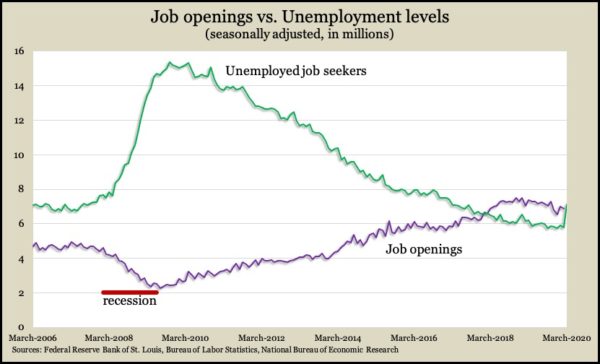 After two months of weak recovery, the manufacturing industry returned to a recession in March, according to an index from the Institute for Supply Management. Purchasing managers surveyed for the index blamed oil-price wars and the spread of the novel coronavirus for interrupting supply chains and curtailing demand. Components for new orders and employment declined to their lowest points since the Great Recession.

The Commerce Department said the annual rate of construction spending declined 1.3% in February. Analysts had expected an increase in the volatile indicator. The pace quickened by 6% from the year before, with housing leading the way. Specifically, single-family residential spending rose 11.3% from February 2019. Government spending on construction fell 1.5% for the month but was up 7.4% from the year before.

The four-week moving average for initial unemployment claims reached another record high as job displacements from the COVID-19 virus continued to soar. The Labor Department said the four-week average rose to 4.27 million applications from 2.67 million the week before and just above 1 million the week before that. Prior to the pandemic, the highest four-week average was 674,000 in 1982.

An economic slowdown showed in wholesale inflation figures from March. The Bureau of Labor Statistics said the Producer Price Index declined 0.2% from February, following a 0.6% dip in January. A 6.7% drop in energy prices led the decliners. Aside from volatile food, energy and trade service costs, the index fell 0.2%, the biggest one-month decline since October 2015. Year-to-year, the so-called core PPI rose 1%, the least since July 2016.

With consumer spending driving almost 70% of the U.S. economy, a record decline in consumer sentiment suggested troubled times ahead. The University of Michigan index dropped to a reading of 71 from 89.1 at the end of March, the biggest decline in about half a century of data. The drop from 101 in February was the greatest two-month swoon on record. An economist with the survey warned, “Consumers need to be prepared for a longer and deeper recession rather than the now discredited message that pent-up demand will spark a quick, robust, and sustained economic recovery.”

The broadest measure of inflation showed prices receding in March. The Consumer Price Index declined 0.4%, the most since January 2015, according to the Bureau of Labor Statistics. A 10.5% drop in gasoline prices led the decline with costs for air fare, lodging and apparel also falling. Excluding volatile food and energy costs, the core index fell 0.1%, its first monthly decline since January 2010. Compared to March 2019, the CPI rose 1.5% while the core CPI rose 2.1%.