Consumer spending – accounting for more than two-thirds of U.S. economic activity – barely budged in February, according to the Bureau of Economic Analysis. Even though personal income gained 0.2% from January, consumers elected to pocket much of the money, raising the personal savings rate to 5.4% of disposable income, the highest in a year. On a year-to-year basis and adjusting for inflation, consumer spending rose 2.8%, the highest since October and above the 16-year average rate of 2.3%. The Fed’s favorite measure of inflation remained below the central banks’ target of 2%. 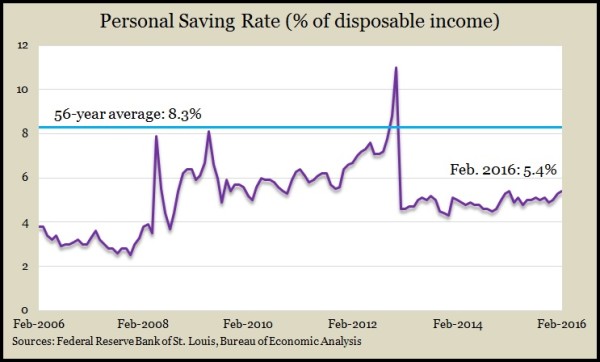 The uneven housing recovery continued driving up prices in January, according to the S&P/Case-Shiller Home Price Index. The 20-city composite index rose 5.7% from January 2015, the 46th consecutive rise in year-to-year prices. The index is nearing its level before the recession. A housing economist for Standard and Poor’s cited low inventories for the pricing pressure. He blamed lending requirements for restricting many would-be home buyers with sizable student loans and credit card debt.

The moving four-week average for initial unemployment claims rose for the second time in two weeks after hitting its lowest level since December 1973. Labor Department data show claims continue to remain at levels suggesting that employers are reluctant to let go of their workers. Average claims are down 60% since their recession peak. They’re 27% below the 48-year average.

Employers added more jobs than expected in March, and the unemployment rate rose to 5%, largely because more jobseekers entered the pool. The latest figures from the Bureau of Labor Statistics show a relatively healthy hiring climate except for manufacturing, which has been held back by a weak global economy, and mining, which has been hit by low commodities prices. The average hourly wage rose slightly after declining in February.

U.S. manufacturing expanded in March for the first time since August, according to the Institute for Supply Management. The trade group’s manufacturing index showed 13 of 18 industries surveyed reporting a rise in new orders. Production also rose notably from February. However, hiring contracted for the fourth month in a row.

The Commerce Department said the pace of construction expenditures declined in February, disappointing analysts. Spending on residential building – which accounts for about 40% of the total – rose slightly from January and gained 10.5% from the year-ago pace, remaining a significant contributor to the country’s moderate economic growth. Public construction of schools, roads and sewers decreased.

Adjusted for inflation, Americans’ personal financial outlook rose to its highest level since before the recession, according to the March consumer sentiment index from the University of Michigan. Though slightly below its February reading, the index has been relatively steady since June. A Michigan economist said the index suggests consumer spending should grow about 2.7% for 2016.