Sales of existing houses rose to their fastest pace in six months in January and their highest year-to-year increase since mid-2013. The National Association of Realtors warned that a relatively short supply of houses for sale has been pushing up prices too quickly, which could be pricing some wannabe home buyers out of the market. The trade association questioned whether the nation would have sufficient inventory for spring sales.

The December report from the S&P/Case Shiller home price index shows house prices moderating but still far outpacing inflation. Year-to-year housing inflation was 5.7% in the 20-city composite index, about twice the overall inflation rate. A housing economist with the index said price increases should stimulate more home building, which has been lagging the moderate economic expansion. A lack of inventory has been a chief cause of rising prices.

The Conference Board released a lower consumer confidence reading in February than analysts expected. An economist for the business research group said stock market turbulence may be undermining some of consumers’ collective outlook, but their relatively rosy feelings toward current conditions suggest continued economic growth.

In further housing news, new home sales in January dipped from a solid annual pace in December. The Commerce Department reported the first slowdown in four months, citing a decline in activity in western states. Still, sales have been hovering near their pre-recession levels, providing continued stimulus for further economic growth dependent on local and regional conditions. 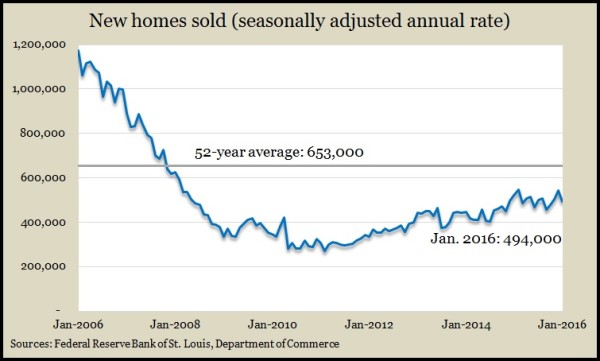 Led by automobiles and the volatile commercial airlines category, January orders for durable goods rose more than expected, gaining for the first time in three months. Excluding transportation equipment, orders reflected broad growth in manufacturing demand. The Commerce Department said civilian capital goods orders minus aircraft, an indicator of business investments, rose by 3.9% from December, when it declined by 3.7%.

Employers continued to be reluctant to let workers go as the moving four-week average for initial unemployment claims dropped for the third week in a row and the fourth time in five weeks. The Labor Department reported that the average remained 24% below the 48-year average level, which it has been below each week since early 2013.

The economy grew a tad faster than initially estimated in the last three months of 2015, with inventories piling higher but slower consumer spending. The Gross Domestic Product. The Bureau of Economic Analysis said its second look at the GDP showed a 1% annual gain in the fourth quarter. That follows a 2% annual growth rate in the third quarter, down from 3.9% in the second quarter. Consumer spending, which drives two-thirds of economic growth, rose 2% in the latest quarter, down from an initial 2.2% and below the long-term average of more than 3%.

A narrower, more recent look at consumer spending showed higher-than-expected activity in January, rising 0.5% from December, the biggest gain in eight months. The Bureau of Economic Analysis said personal spending rose as personal income grew by 0.5% and the saving rate stayed at 5.2%. A key measure of inflation followed by the Federal Reserve Board rose to 1.7% for January 2015, closer to the Fed’s target of 2%, which hasn’t been reached for more than three years.

Consumer sentiment nearly recovered from a mid-February dip but still remains fairly optimistic, according to the University of Michigan. Considered a leading indicator of consumer spending, the sentiment index was 6.5% off of its recent peak 13 months ago. An economist with Michigan said the survey suggests consumer spending may slow to about 2.7% this year, down from 3% in 2015.