Retail sales dipped in January following a decline in December that initially was reported as a gain. Extraordinarily cold and stormy weather might have played some role, but the Commerce Department reported sales fell 0.4% from December. Car sales in particular pulled down the totals, but even factoring out the volatile categories of auto dealerships and gas stations resulted in a 0.2% setback in January sales. Only four of 13 categories showed increased sales for the month.

In a separate report, Commerce said business inventories a tad more than analysts expected in December. But companies were stocking shelves faster than they were selling products, which means businesses are running a little less lean and could have to wait for demand to rise before boosting production and employment.

The moving four-week average for initial unemployment claims rose for the third week in a row, while staying at historically low levels. The Labor Department reported that the average remained below the year-ago level as well as the 47-year average, suggesting that employers are resisting letting workers go – even while hiring rates aren’t increasing.

The Federal Reserve said industrial production in January dipped unexpectedly, including manufacturing. Weather appeared to account for some of the setback, but the slowdown served as a reminder that the U.S. economic expansion has been unsteady. Capacity utilization – the Fed’s measure of how much U.S. production facilities are in use – also decreased, suggesting inflation still is not an imminent threat. 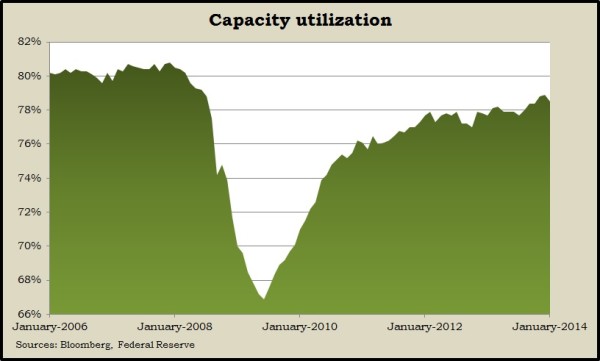 A preliminary February gauging of consumer sentiment showed Americans growing more optimistic about the future but less enchanted with current conditions. The University of Michigan and Thomson Reuters news agency reported that the sentiment index overall remained unchanged from January.