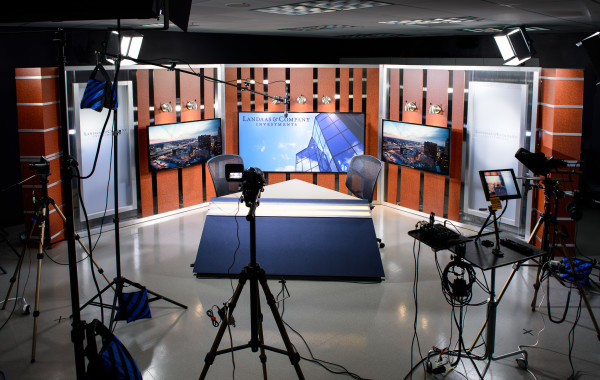 While it may seem an extraordinary addition to an investment advisory firm, the studio makes sense in the context of the career of Bob Landaas, says Peter May, vice president of video at Landaas & Company.

Peter designed the studio space and filled it with all the equipment necessary to produce high-quality financial news and investment education projects.

“Being able to step into the studio and simply ‘throw the switch’ will allow Bob to respond quickly to the twists and turns markets are destined to take and communicate more effectively and directly with clients and anyone out there on the web who’s interested in objective and intelligent advice,” Peter said.

Peter and his wife, Ruth May, produced the weekly Milwaukee Public Television show, “Dollar Signs: Insights for the Intelligent Investor,” which Bob hosted from 1992 to 2000.

Five years before the TV show, Bob had begun “Money Talk,” a weekly investment advice program, at the invitation of a Milwaukee radio station. That made Bob the logical first choice as host for a locally produced companion to the hugely popular national PBS offering “Wall Street Week with Louis Rukeyser.”

Within five years, “Dollar Signs” was airing in 99 markets coast-to-coast. Some of the biggest names in mutual fund investing jetted to Milwaukee to share their thoughts with Bob.

In 2000, the dot-com bust put an end to the parade of high-flying managers, but Bob had already experienced video communication and understood its power as an educational tool.

In the next decade, expanding market coverage on cable channels and the availability of data and analysis on the Internet altered the financial reporting landscape.

By 2002, even Rukeyser had lost his PBS slot and moved to cable. At the same time, technological advances began shifting professional-grade video equipment into the hands of consumers.

High definition swept the land. While broadcasters balked at the expensive upgrade, consumers didn’t. A few years into the new millennium, families were recording their vacations in better resolution than the national networks were broadcasting.

The video revolution had begun. Not only were cameras getting better, LEDs (light-emitting diodes) were making video lights cheaper and cooler. Microphones were dropping in price, and just about every new computer – tablets included – offered the ability to edit video.

The cost of making videos dropped dramatically. The cost of distributing video dropped to zero.

YouTube came online in 2005 and offered a direct route to the public, bypassing broadcasters and cable outlets, which today struggle. The biggest financial news network, CNBC – with a 75% market share, serves 169,000 daytime viewers. Compare that to a viral YouTube video, which can top one hundred million views.

Americans have become avid consumers of online video, and there’s plenty to see. More than 3 billion videos are viewed on YouTube daily. Online video now makes up 50% of all consumer Internet traffic, and on any given day, 100 million people will watch videos online.

And we’re not just interested in entertainment. People want to be enlightened and informed as well. A recent Forbes Insight survey found that 60% of senior managers across America would prefer to watch online business video rather than reading text on the same topic. And shorter isn’t better. The majority of the executives polled prefer their work-related videos to be between three and five minutes long.

Here, at the intersection of technology and Internet capacity, Bob Landaas has taken an opportunity to offer his educational ambitions back to the TV screen.

“It’s been a long time traveling without a reliable media map,” Peter said, “but finally, the road has led Bob to this studio, and it sure feels like the right place at the right time.”