Arthur Laffer contends that when tax rates go up next year, it’s the beginning of the end. That’s just a bunch of gibberish.

We expect tax rates to go up. The nation’s deficit is at an all-time high after the deepest recession since the 1930s and with costly wars in Afghanistan and Iraq.

And the tax cuts enacted in 2001 and 2004 are scheduled to expire in January 2011. We don’t know yet which rates will go up, but the White House at least has said it’s interested in letting the highest marginal rate go back up to 39.6% from where it is now at 35%.

Arthur Laffer got his claim to fame helping to convince Ronald Reagan to lower taxes. He is the namesake of the Laffer Curve, which supposes that taxes act as disincentives to productivity and that at some point higher tax rates result in lower tax revenue.

Laffer used this reasoning to declare in a widely quoted opinion column recently: “The economy will collapse in 2011.”

First of all, nearly half of the U.S. doesn’t pay income tax. Nearly half.

Furthermore, when you look at the top tax rate going up to 39.6% potentially next year, a husband and wife filing a joint return would need $374,000 of income to hit that level. Take a guess how many people make that kind of money: Less than 1%.

So it’s counterintuitive to me to think that with less than 1% of the American people facing that kind of tax hike that we are in fact going to go into a tailspin.

Point number two. Laffer goes off on a tangent and talks about how the U.S. government is going to get rich this year because of Roth IRA conversions and that when Roth conversions go down next year, the government’s going to seriously struggle for revenue.

That one caught my attention because for one, at Landaas & Company, we just don’t see that many Roth conversions. People hate paying income tax, which is what you have to do when you’re converting to a Roth IRA.

So everybody hates paying income tax, but it’s wrong to think that higher taxes are going to be the beginning of the end of our economy.

Asha Bangalore, economist at the Northern Trust Company in Chicago, reacted to the notion that tax rates would collapse the economy by saying that evidence “suggests Mr. Laffer’s story is selective and incomplete.” She said that if the economy doesn’t stay strong next year, it would be the fault of continued trouble from the credit and housing markets and unemployment, not tax rates.

I was amazed how the talk shows picked up Laffer’s article and ran with it, beat the daylights out of it. So let’s just nip this in the bud as best we can.

When I first started managing money in 1975, the top tax rate in the United States was 70%. Think of that. It was confiscatory.

Now, I hate paying taxes, just like the next guy. But it’s wrong to think that higher tax rates spell doom and gloom for the country and for the economy moving forward. 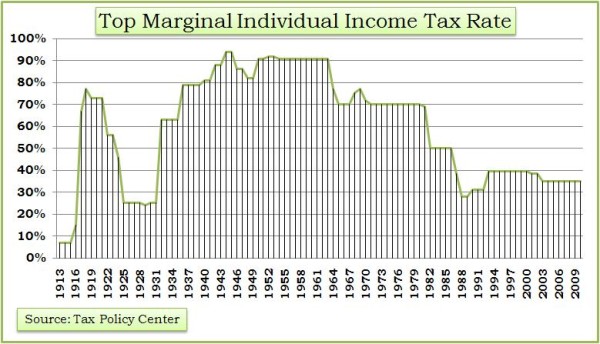