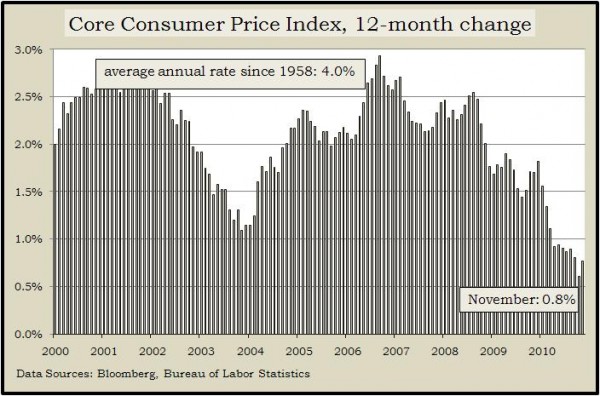 The lack of inflation in the United States clearly signals a slack in the economy as the country continues to fight its way out of the worst financial crisis in a generation.

Core consumer prices, excluding the volatile food and energy sectors, have risen only 0.8% from a year ago. This miniscule rise is due, among other reasons, to high unemployment (9.8% in November) along with slow wage growth and cautious consumers.

The low rate of inflation makes it less likely interest rates will rise, which will limit the recent sell-off in the bond market.

Most people are praying for at least some inflation right now because that would indicate renewed economic growth. The recent extension of tax cuts and unemployment benefits should serve as a short-term stimulus to the economy.

Inflation remains well below the Federal Reserve’s target of just under 2%, allowing room for additional stimulus, if necessary, to encourage economic growth.

Each month, the Bureau of Labor Statistics releases estimates of the previous month’s Consumer Price Index, along with revisions of preceding reports. The next scheduled release is 7:30 a.m. Milwaukee time Friday, Jan. 14.