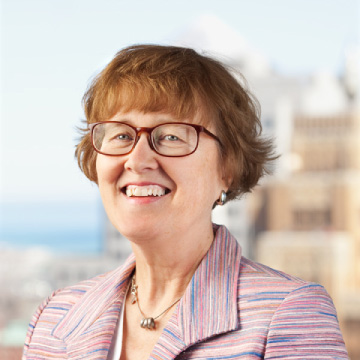 After three decades of helping individuals prepare for and afford retirement, Margaret Schumacher decided to join them.

“I’m just going to be another retiree,” she says. “That’ll be interesting.”

Margaret retired April 15 as vice president at Landaas & Company, where she had been guiding the financial success of hundreds of families for 15 years.

It’s the week before her last day in her office. Her back is to the window. Outside, a bright spring day beckons. She talks about her plans for retirement, how she’ll miss clients, colleagues – and status. She reflects on lessons she has taken from her career.

“Putting your client first is key to this business,” Margaret says. “I did recognize early on that putting the client first was going to be good business because people sense that you’re doing that.”

Her calling as a financial planner and investment advisor gave Margaret a way to apply her math skills by helping others through long-term relationships.

“One of the best things about having a financial advisor is that people are less nervous, less anxious than if they’re trying to figure it out and do it all themselves. This gives them the courage to stick with a good investment program,” Margaret says.

At a catered luncheon in the office, Bob Landaas presented Margaret Schumacher with a retirement gift from the firm and praised her contributions to the company’s success.

“She will be missed,” he said. Colleagues joined in and pleaded with Margaret to return often to visit.

At one point in the party, Margaret related her family’s tradition of attending basketball games, from which comes these rules to live by:

Each regular contact with clients gave her a chance to gauge their investment portfolios, their relationships with her, as well as their expectations. She saw her role as an objective listener, a knowledgeable advisor, an impassive observer. She treated it as a responsibility, often trying to protect investors from their impulses.

“I came to realize how little investment success has to do with our instincts. It’s almost better to ignore your instincts, which is very hard to do. Our instincts for survival don’t have anything to do with financial success,” Margaret says.

That lesson became especially difficult to apply during the recent global financial collapse and economic downturn.

“The depth of the crash and the level of fear and unhappiness in our clients – I felt myself getting sucked into that,” she says. “You have to train yourself to remain the impartial person and to give the good advice. And it is hard to do in the midst of those.”

It helped having “a smart firm behind you, with everyone giving the consistent message,” Margaret says. And if investment markets become more volatile as a result of communications technology and more extreme views – whether political or financial, she says investors and their advisors need to steel themselves to be less skittish.

Margaret says she will miss clients: “You do have this strangely intimate knowledge of their lives and their relationships. Often you have connected on a very personal level.”

And she’ll miss colleagues: “We just have such a good group of people here.”

She’ll also miss associating herself with a profession that is both caring and intellectually stimulating.

“This position, my work, has been a big part of my identity,” Margaret says. “And I don’t think you can take that with you – that part of who I am and how people respond to you. When you say you’re an investment advisor, there’s a certain amount of interest and respect you get, and I will miss that.”

Margaret had been getting used to the idea of retirement. For the last five years, she has taken off the month of February and toured with her sister and their bikes in an RV.

She figures she will devote more time to her non-profit work, including as treasurer of the Episcopal Diocese of Milwaukee. She also plans to travel more – including trips to India and China, to read more and to bike more.

“Full retirement gradually grew more attractive to me. It has been on my mind,” Margaret says. “I just put it all together and it was right.”

By Joel Dresang, vice president of communications at Landaas & Company.